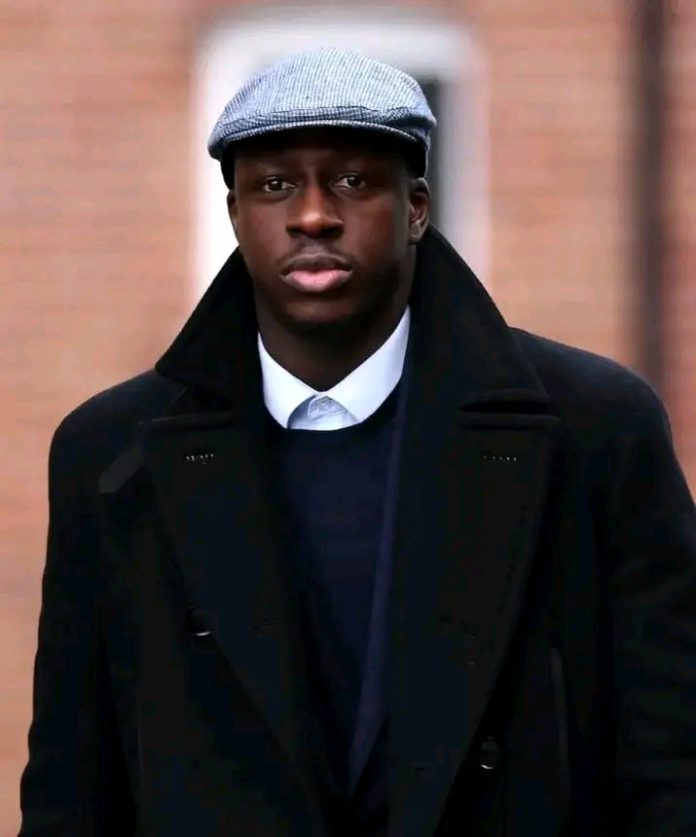 Benjamin Mendy will face a retrial on one count of rape and another of attempted rape after a jury failed to reach verdicts – as he was cleared of seven other charges.

The Man City star, 28, sitting in the dock at Chester Crown Court, covered his face with both hands, gently rocking back and forth, as the jury foreman, delivering the verdicts in a hushed courtroom, repeated ‘not guilty’ to six counts of rape and one count of sexual assault, relating to four young women or teenagers.

However, the  jury were unable to reach verdicts on another count of rape and one attempted sexual assault – alleged to have taken place at Mendy’s £4.7million mansion in Prestbury, Cheshire.

He will now face a three-week trial on the two outstanding counts starting on June 26.

The unanimous verdicts were delivered today by the seven men and four women on the jury, one juror having been discharged earlier for medical reasons.

Jenny Wiltshire, Head of Serious and General Crime at Hickman & Rose, said Mendy was ‘delighted’ to have been cleared of sex attacks on four women and ‘looks forward’ to clearing his name at a re-trial over two other allegations and ‘rebuilding his life’.

She said: ‘My client Benjamin Mendy would like to thank the members of the jury for their dedication and commitment.

‘He also thanks everyone who supported him, and particularly the witnesses who gave evidence on his behalf in the glare of such intense publicity. He looks forward to clearing his name in relation to the other two charges so he can start rebuilding his life.’

A spokesman for Man City said: ‘We note the verdict from Chester Crown Court today, where a jury has found Benjamin Mendy not guilty of seven charges. The jury is hung on two charges and the trial is now over.

‘Given there are open matters related to this case, the Club is not in a position to comment further at this time.’

He said: ‘The prosecution has made a decision. We have made a decision today, which is to proceed on these counts in two separate trials and we seek today a provisional case management.’

The trial, due to start last January, lasted nearly six months, with the jury of eight men and four women hearing a string of alleged sex crimes against 13 original complainants.

The allegations and trial had been ‘absolute hell’ for Mendy, the court heard, and his life in football ‘is over’ as he would ‘never escape’ the accusations.

Mendy had been accused of being a ‘predator’ who turned the pursuit of women for sex into a game, his trial heard, drinking champagne in VIP areas of Manchester nightclubs before inviting young women into ‘toxic and dangerous’ situations at ‘after-parties’ at his £4.7 million Cheshire mansion in Mottram St Andrew, near Prestbury.

Timothy Cray KC, prosecuting, said Matturie, known as Saha, was Mendy’s ‘friend and fixer’ and used a £2,000-a month rented flat in Salford to hold parties. Mendy also paid him £17,000 for his services over the course of a year.

Mr Cray said that Saha Matturie’s job was to find young women for Mendy and ‘to create the situations where they could be raped and abused.’

He told the jury: ‘The acts that the defendants did together show callous indifference to the women they went after. In their minds, and this could not be clearer, the stream of women they brought to their homes existed purely to be pursued for sex.’

But jurors were also told by defence lawyers that while the trial, involving money, sex and celebrity, had ‘all the makings of a good drama’, it came with a significant ‘plot twist’ – the accused were innocent.

Lockdown-busting parties were held both at Mendy’s home and an apartment he rented on Chapel Street near Manchester city centre, the court heard.

He was first arrested in November 2020 after the alleged triple rape of the 24-year-old woman at his home the previous month.