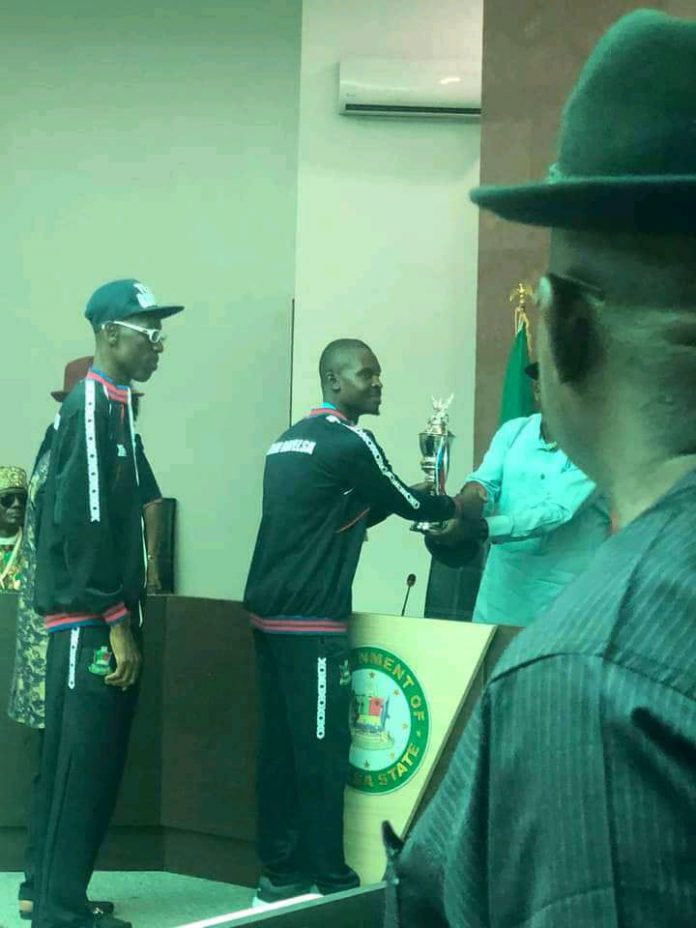 Bayelsa State Governor, Senator Douye Diri, has received the athletes who made the state proud at the National Sports Festival in Asaba Delta, tagged Delta 2022.

The State contingent finished second in the Nigerian version of Olympics for the first time behind host Delta, a feat that took the nation by storm having surpassed the record set in 2006 in Benin City Edo State.

Receiving the athletes at the Executive Chambers in government house Yenagoa, Governor Diri said the performance of the athletes was indicative that the prosperity mantra of his administration was not a fluke, saying that the achievement was as a result of the rugged determination displayed by the athletes.

The governor, urged the athletes to reciprocate the gesture by improving on their performance in the next festival in Ogun State and assured that the government would not relent in promoting sports at all levels.

Governor Diri noted that due to the global attention sports has given to the state that his administration would embark on upgrading of some sports facilities in the state, especially in areas of comparative advantage like swimming and wrestling.

He asserted that constructing a new stadium in Bayelsa has become imperative following the State sterling displays in sports in the last three years, noting that plans to kick start the project was almost concluded.

The largesse also favoured non- medal winning athletes who were appreciated with N50,000 each likewise their coaches and secretaries who got the same amount.

The governor also announced employment for athletes into the state civil service for making the state proud and directed the Deputy governor Senator Lawrence Ewhrudjakpo and Commissioner for Youths and Sports Development to work out the modalities.

In a remark,Commissioner for Youths and Sports Development, Dr Daniel Igali said Team Bayelsa brilliant outing was as a results of the financial support rendered to sports by the government ,noting that the gesture has placed Bayelsa high in Nigeria.

He noted that apart from breaking festival records in swimming and other sports that state athletes equally set a new records that have lasted for over 30 years describing the feat a result of the goal getting management of the sports council and the athletes never say die spirit.

Also, Director of Sports Bayelsa State Sports Council, Sir Braveman Wodi, said the gesture by the governor has further demonstrated that the Prosperity administration love for sports was second to none.

Sir Wodi thanked the the governor and his deputy governor Senator Lawrence Ewhrudjakpo for giving premium attention to sports development describing the upgrade of the sports facilities by governor as welcomed.

Two athletes Akpos Malafakumo-Best and Jeremiah Akpan, said the they are prepared to go beyond the second position in Abeokuta, Ogun State next year, appreciating the governor for giving priority to athletes welfare.

The duo however thanked their coaches for the tutelage, describing governor love for sports as astonishing.

Franck Ribéry: I know how bitter it is to lose a...