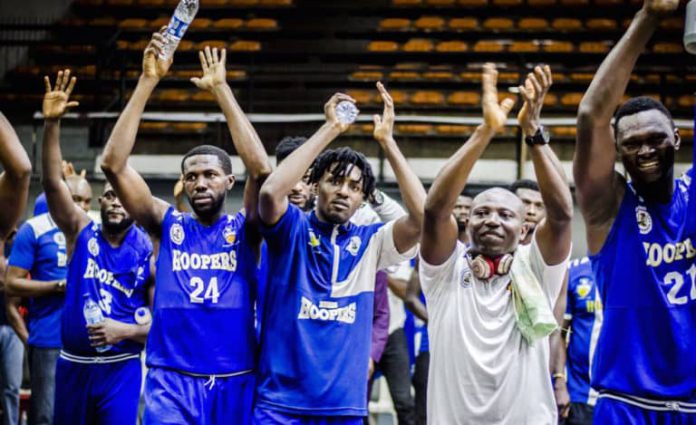 The reigning champions of Nigeria Men’s Premier Basketball League, Rivers Hoopers are on the quest of making a second straight appearance at the next edition of Basketball Africa League with a hard-fought victory 85-76 against Nigeria Customs in the semifinals of the Nigeria Basketball Federation Final Eight in Abuja.

Owen Oriakhi led the way for Hoopers in the decider with 24 points while also pulling down three rebounds.

Customs Usman Alhaji scored a game high of 25 points, 9 rebounds, followed by Osigbodi -14 points & Aikhuetie (10) for Scott Nnaji’s men who edged the second quarter 36-33 as they looked to upset the odds and reach the finals.

However, they fell apart under the weight of  29-point from the Hoopers that left the scoreline at 62-54 at the end of the third quarter.

Hooper’s quartet of Anaiye, Balogun, Onyebuchi and Ezra mustered 12, 11, 10 & 10 points respectively for Ogoh Odaudu side to reach double figures. Their cause was made a bit difficult by 21-37 turnovers but won the rebound battle by a 55-37 scoreline.
With 4:10secs left on the clock in the last quarter, Chimobi who had 11points pulled a three pointer from nowhere to level the game 70-70 for the fourth time however, Hooper’s kept the driving from end to end to eventually sealed the win.

Rivers Hoopers will play the winner of the other semi-final contest involving Gombe Bulls and Kano Pillars in the final.