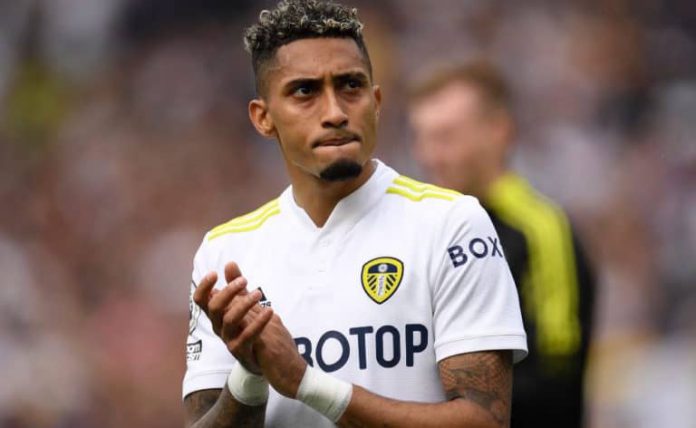 Barcelona has confirmed they have agreed a deal with Leeds to sign Raphinha, with the Brazil international set to complete his Nou Camp move once he has passed a medical.

A club statement confirmed the news on Wednesday, while it is believed a fee in the region of £56m convinced Leeds to part ways with their star man.

The 25-year old, who trained at Leeds’ Thorp Arch training ground on Tuesday, is expected to sign a five-year contract.

Chelsea had been pushing to sign the attacker, as well as Arsenal, and it had been indicated he preferred a move to Stamford Bridge if his choice was between the two Premier League sides.
But as soon as Barcelona’s interest was firmed up, there was only ever going to be one outcome.

‘It’s hard to see him leave, I know it’s his dream to play for Barcelona,’ Leeds boss Jesse Marsch said. ‘There has been distinct movement with Barcelona, we think things will move along quickly but it is certainly not finished yet.

‘I will say this about Raphinha: If you think about a young man who was pretty much guaranteed to go on a reduced transfer fee to Barcelona if we were relegated and then you watch the performances and the commitment he had to make sure the club was going to stay up… I think it would be hard for any person with that kind of pressure and opportunity to perform the way that he did.

‘We are so thankful, I had that very clear conversation with him and a big part for me of us considering to move him was the fact that he was so committed.’