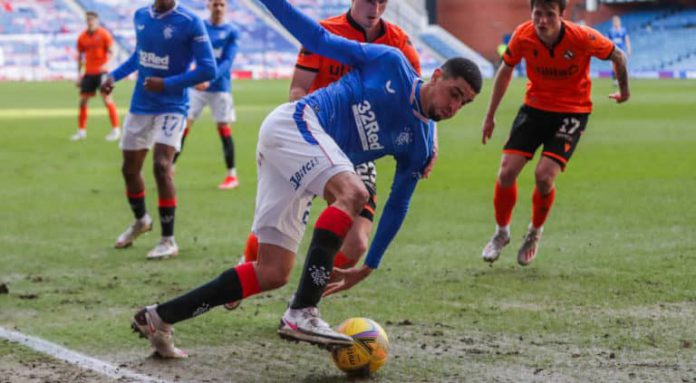 Glasgow Rangers’ Leon Balogun and Spartak Moscow’s Victor Moses have been recognised for their outstanding performance in the latest round of matches in the Europa League with football statistics website Whoscored naming the duo in its Best Eleven.

From a set play worked to perfection, the former Brighton & Hove man wasn’t picked up and he rose to head home a fine delivery from Tavernier to open the scoring for the Light Blues in the 18th minute.

In addition to making the ceremonial Best XI, Balogun was the standout player on parade at Ibrox Stadium with a rating of 8.2, which is impressive considering that he was on the pitch for 64 minutes before going off injured.

In the Europa League Best XI, Balogun slotted in at central defence, partnering with Galatasaray’s Marcão.The Nigerian had one shot on target, won two aerial duels, completed 88.9 percent of his passes and did not concede a foul.Defensively, he registered three tackles, three interceptions and one clearance while making one block.

Former Chelsea wing-back Victor Moses had two goal involvements as Spartak Moscow squandered a two-goal lead to lose 4-3 to Kelechi Iheanacho’s Leicester City, providing the assists for the second and third goals scored by the Muscovites.With a rating of 7.73, only Alexander Sobolev (8.26) rated higher than the number 8 in the Spartak Moscow team.

Moses registered two shots and two key passes, won one aerial duel, completed two take-ons, was fouled once and gave away three, while making two tackles and one clearance.In a 4-4-2 formation, the 2013 Africa Cup of Nations winner was deployed on the right side of midfield.

Our priority now is to unite Minority Caucus – Armah-Kofi Buah