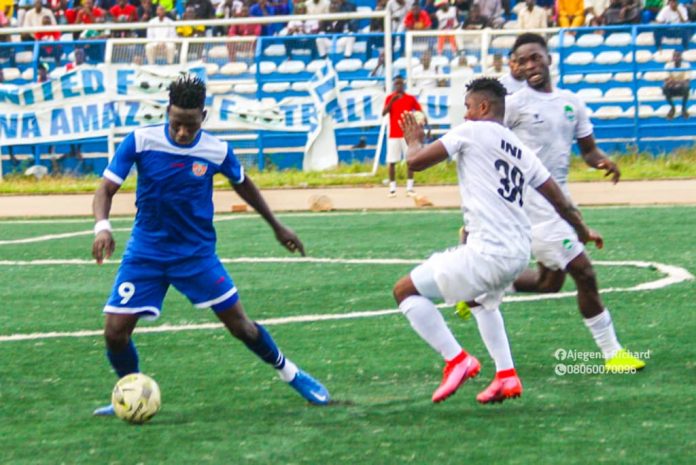 A tired-looking Sunshine Stars side on Sunday capitulated in the first half to suffer a first loss in nine games across all competitions and their heaviest of the season; 4-0 at the hands of Silas Nwankwo inspired Nasarawa United in Lafia.

Silas who was involved in all goals, first pounced on an 11th minute sloppiness in his former side’s yard before grabbing his second five minutes later, guiding into an empty net from a poor clearance.

He then set up Aliyu Abdullahi against the run of play in the 23′ and later won a free kick that was dispatched by another ex Sunshine Stars’ player, Chigozie Obasi as the hosts rounded up scoring in a first 45 minutes to forget for the visitors.

The Owena Whales went about their second period play with lot of improvement and renewed effort however, could not find a route back into the contest.

Ifegwu Ojukwu went close to what would have been a consolation 15 minutes from time but his header from a cross at the near post was kept out by Galadima Mohammed in goal for the Solid Miners as the second half produced no goal for either side.

Sunshine Stars have been made to play five matches in ten days, navigating close fixtures in the NPFL and the AITEO Cup, a phenomenon that was bemoaned by Ayeni when faced with the media after the game.

He said, “That is football; sometime you get it right some time you don’t and I see a lot of fatigue in the boys. We are burning these players and they are even playing on artificial turf which is not even good medically. It will get to a stage that when you try push the players it will not work.

“Congratulations to Nasarawa United! We go back home and re-strategise for the semifinal (AITEO Cup) and I know it will be a different ball game. We have been on the road for the past two weeks, my sleeping is not even alright but nothing we can do about it, we just have to keep working on the players mentally. We don’t even have time to train; it has been matches, matches. Ayeni added.

Sunshine Stars will look to boost their survival chance with a home win against Plateau United on NPFL match day thirty six before having a re-match with Nasarawa United in the AITEO Cup in Asaba on Friday.