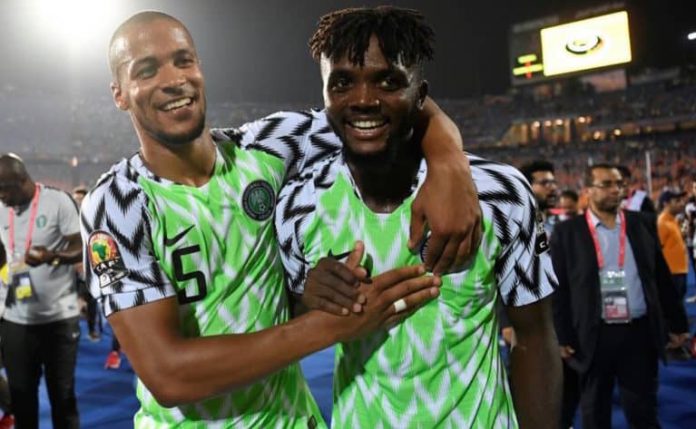 Nigeria’s caretaker coach, Austin Eguavoen, has begun running the rule over four goalkeepers named in the Super Eagles finalized squad for the Africa Cup of Nations

Alanyaspor central defender, Chidozie Awaziem, has discussed the Super Eagles preparations for the Africa Cup of Nations, which kicks off in Cameroon on January 9, 2022.

The Boavista-owned player is sounding confident that the Super Eagles will finish among the podium places in Cameroon.

Awaziem was one of the unsung heroes as the Super Eagles finished third at the 2019 Africa Cup of Nations, filling in for the injured Abdullahi Shehu at right-back and was involved in every single game during the tournament in Egypt with the exception of the third place playoff he missed only because of suspension.

The 25-year-old also made a brief remark on the change in the Nigeria dugout ahead of the AFCON, saying Augustine Eguavoen is doing a good job.

Speaking to NFF TV, Awaziem said: “It has been a wonderful atmosphere in the camp. We are preparing with the few players in camp and training sessions have been good, everyone is giving his best and the coach is doing a good job.

“We are hoping to get more players as soon as possible so we can have a full team and prepare for the Africa Cup of Nations properly.

“It’s the New Year and everyone is positive, we believe we can achieve something great this year.” Awaziem’s versatility means that he can be deployed as a central defender, right fullback and defensive midfielder.

If you do not show up to vote, you shouldn’t complain...