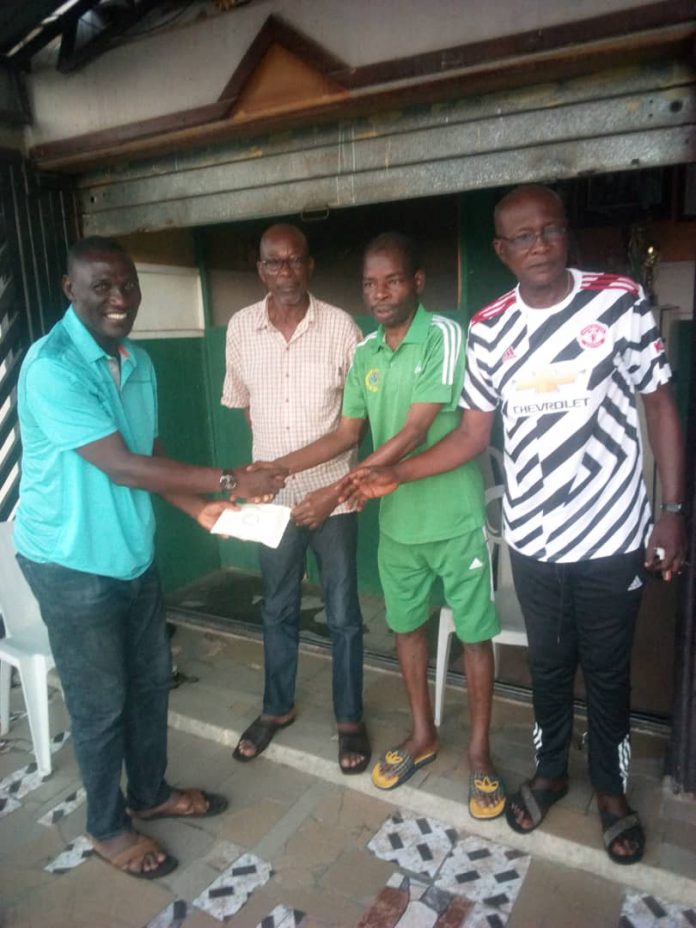 The Assistant Coach of Gateway United Football Club of Ogun State, Coach Toyin Ayinla was full of praises to the Almighty God and members and the Executives of All Stars Football Club, Abeokuta for footing the bill of his tuition fees for the prestigious CAF Instructor’s course in Abuja

At a brief Cash presentation ceremony which was organized at the Secretariat of the Club inside the MKO Abiola Stadium in Abeokuta, the Kwara State-born Coach who was brimming with smiles said he gives all adoration to the Almighty God for him to be alive and to be among the selected few and he specially thanked the Association (All Stars Football Club, Abeokuta) for deeming it fit to assist him. He promised to reciprocate the good gesture whenever the need arises while also praying for abundant reward for every member of the Association

Coach Ayinla who was former Abiola Babes player and former Assistant Coach of the Falconets disclosed that he sees Abeokuta as a second home, for he has been living there for the past thirty-five years and so he appeals to the government to build more football training Pitches around the MKO Abiola Stadium for hidden talents to be able to harness their potentials.

Coach Ayinla submitted that Ogun State being the gateway to every success in the country should not be found wanting when it comes to football and Sports development. He advised the upcoming Coaches to be steadfast and be dedicated to their choosing career so that the sky would not be their limits

It would be recalled that the CAF Instructors’ course is a periodic exercise being organized for a few selected Coaches around the continent and Nigeria can only boast of a few distinguished elites in Pa Adegboye Onigbinde who is a FIFA and CAF Instructor, late Coach Kashimawo Laloko and late Coach Amodu Shaibu.

This year’s course kicks off on Monday 25th of October, 2021

In his goodwill message,the President of All Stars Football Club,Abeokuta Alh. Waheed Kashimawo Lawal said Coach Toyin Ayinla would remain a pride to the Association as he appeals to him to always carry the flag of the Club high anywhere he goes. The President admonishes other upcoming Coaches to emulate Coach Ayinla in his humble and exemplary character

Alh. Lawal opined that what the Club always strive for is the betterment of all members, especially those who have paid their dues in the round leather game and he thanked God for gradually crowning the efforts.

Lawal advised young and aspiring footballers not to lose hope in their choosing career, he urged them to keep playing the game and continue praying,believing that somehow someday God would crown their efforts.He promised that whatever assistance the Association can render to uplift the career of budding football talents, they would not hesitate to be there when the needs arise.

Debt Crisis: William Ruto to widen Tax Base to Sh4trn

Croatia Win To Knock Canada Out Of World Cup

Magashule plays ‘significant’ role behind scenes, but has no impact on...