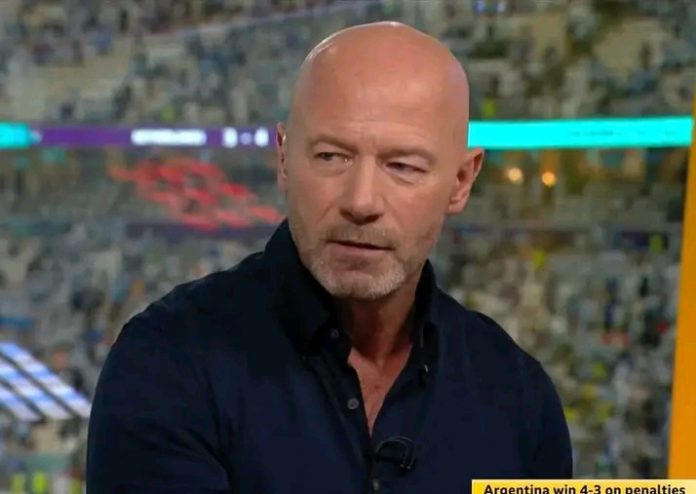 Argentina took an early lead in the pivotal tie as Lionel Messi converted the spot-kick after Croatia’s Livakovic had come charging forwards with Alvarez in the clear – only to clatter the forward as he attempted to go round him.

The referee Daniele Orsato had no hesitation in pointing to the spot to hand Argentina the early advantage with Livakovic failing to get the ball and instead took out the man.

However, some have suggested that the decision was harsh because the ball had been lifted over the goalkeeper by Alvarez while he was trying to block it – a view taken by pundit Neville.

‘I didn’t think it was a penalty,’ ‘The keeper comes out, he stops himself and Alvarez runs into him. What else can you do?

His fellow pundits Roy Keane and Ian Wright were in agreement after watching back the incident.

Ex-Arsenal man Wright said: ‘The centre-forward has miskicked it, because if he kicks it it goes into the goal, the keeper can’t do anything else but stand his ground. It wasn’t a foul.’

And Keane added: ‘Poor defending overall, but I don’t think it’s a pen.’

However,Match of the Day pundit Alan Shearer was in no doubt about the decision made – saying it was a clear penalty.

Shearer said: ‘What a run from Alvarez, he find himself clear. It’s wide open for him. He dinks it over the goalkeeper and Livakovic trips him. For me, it was the right decision.’

Former England goalkeeper Rob Green – also on commentary duty for the station, was in agreement – saying the referee was left with little choice.

‘The ref had to give as soon as Livakovic commits. Once Alvarez gets that nick, Livakovic knows he hasn’t won the ball. It was a clear contact, there’s not a lot he could do.

‘Brilliant penalty from Messi, almost Shearer-esque. He did go the same side as we saw against the Netherlands but he went a lot higher.

‘From that as a goalkeeper, as soon as you commit to the dive, you can’t get up, you can’t get high. You run the risk of it going over the bar but if you get it right, unstoppable.’

Commentators Ally McCoist and Lee Dixon also believed it was a penalty – as the former made the point that it would be a foul anywhere else on the pitch.

‘My initial reaction was that it was a penalty, and having seen the replays I’m convinced it’s a penalty. I can’t understand why they don’t think it’s a penalty to be honest with you, because anywhere else on the pitch it’s a free kick without doubt.

‘What the goalkeeper does, it prevents Alvarez from being through on goal, so I think the referee has got it spot on, I really do.’