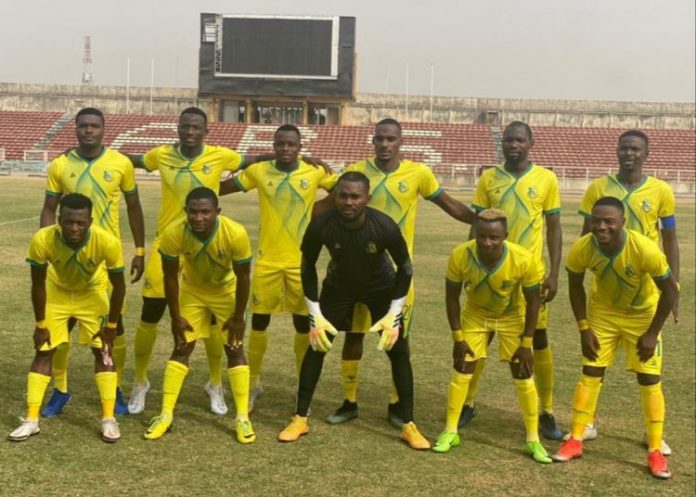 Current Aiteo Cup holder, Kano Pillars on Wednesday began the defence of the Aiteo Cup they won two years ago on a good note outsmarting Smart City of Lagos 4-2 in match round of 32 played at the Confluence Stadium Lokoja the capital city of Kogi state.

With 2-0 lead into the half-time, the Sai Masu Gida left off from where they finished the first in the second half and with seven minutes into the half, got the third goal through Okon Aniemeke off Yanki Joseph’s assist.

Smart City FC laboured hard in afterwards and their efforts paid off with two beautiful goals in 62nd and 73rd minutes of play.

And as the Lagos based side push for the equaliser, they left their home exposed and Nwagua Nyima of Kano Pillars who came from the bench completed the job by scoring the fourth goal for Pillars after receiving pass from Rahaku Adam at 90 minutes of play.

In his post match interview, Kano Pillars FC Acting Technical Adviser Ibrahim A. Musa reaffirmed their determination to defend the trophy they won in 2019 at the end of the competition.

Coach Ibrahim A. Musa said he will continue planning gradually one after the other for each match up the end of the competition.

“You know challenging cup is very difficult competition but we’re not going to be carried away with any team we are going to face in the next round because now no under-dog team in football,” Coach Ibrahim said.

He also said with the spirit in the team he has the confidence that they would come out victorious in Akure on Sunday in the match day 32 of the Nigerian Professional Football League where they be visitors to Sunshine Stars of Akure.

Abramovich Yet To Put Chelsea Up For Sale