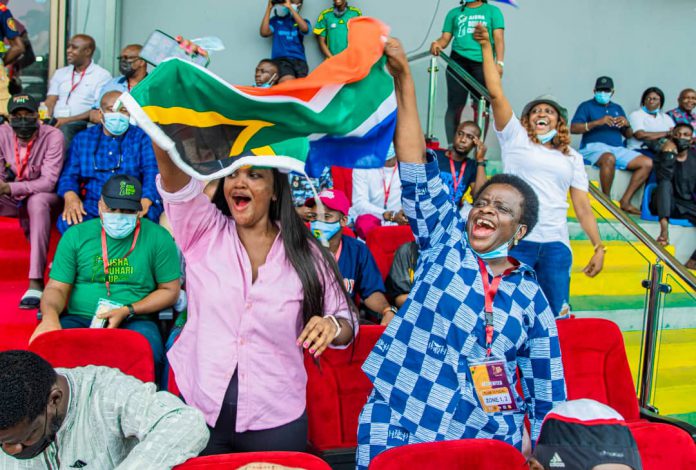 2018 African Woman Player of the Year Thembi Kgatlana was the star of the evening as South Africa steamrolled Ghana 3-0 on Day 3 of the six-day Aisha Buhari Invitational Women’s Tournament in Lagos.

In an entertaining encounter at the Mobolaji Johnson Arena firmly dominated by the reigning African vice champions, Kgatlana was too much to handle for the Black Queens’ rear-guard led by Captain Portia Boakye, and she eventually accounted for one goal and one assist as the Queens were diminished.

The shape of things to come was clear as early as the 7th minute, when Ellen Coleman had to stretch full length to clear the ball from the line as the Banyana launched onslaught after onslaught, the pacy Kgatlana creating most of the trouble. The lithe forward, who plays her club football for Atletico Madrid of Spain, was in good enough position to gift the Banyana the lead after 12 minutes, but that was foiled by goalkeeper Dumehasi Fafali.

In the 17th minute, the nifty Kgatlana screened out her marker on the left but the ball hit the goalkeeper and rebounded off her body to kiss the crossbar. A grateful Hildah Magaia nodded the return into an empty net.

The entertainment flowed freely as Kgatlana showboated in beating three defenders, Van Wyk cleared from the line as Ghana launched a rare offensive and Fafali had to be super-alert to save twice from a dangerous Kgatlana. At the other end, Swart was called to action thrice within seconds as Grace Adams, Nina Norshie and Adubea threatened from close range but failed to get the ball into the net.

In the second half, the Banyana, efficient and diligent at the rear and menacing going forward, added another goal as the irrepressible Kgatlana outpaced two defenders and easily rolled the ball past Fafali on a counter-attack.

For some periods of the game, it looked gritty, but even then, most of the bone-cracking took place in the Ghanaian half as the slick South Africans showed technical superiority that prevailed over steam and resilience.

Seven minutes from time, it got worse for two-time African vice champions Ghana, Sibulele Holweni rising highest in the box to nod home a corner kick by substitute Robyn Moodaly.

Victory meant the Banyana are now the team at the top in the tournament, one goal better than African champions Nigeria who defeated Mali 2-0 on the opening day. A total of six goals have been scored in the tournament, with Nigeria’s Gift Monday the leading markswoman with two goals.

Saturday is rest day for all the teams, before Morocco’s Atlas Lionesses and the Femelle Aiglons of Mali tango on Sunday evening.