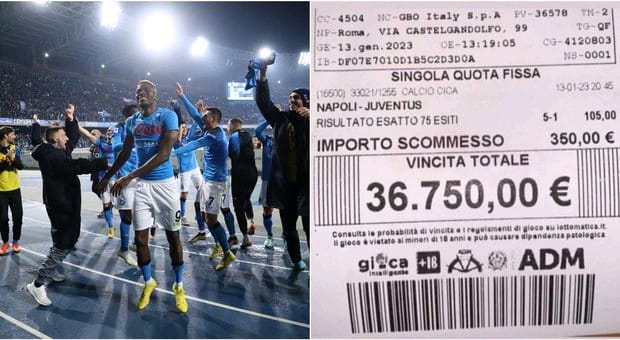 Red-hot Super Eagles and Napoli striker, Victor Osimhen, at the weekend helped an Italian staker rake in a whopping sum of €36,750 [N18m] by netting a brace in his side’s 5-1 victory against Serie A giant, Juventus.

Few expected the historic 5-1 result against Juventus but one Napoli supporter made a perfect prediction, earning €36,750 on his bet at odds of 104/1.

The Bianconeri had not been beaten 5-1 in Serie A since May 1993, which curiously saw current Juve coach Max Allegri score one of the goals that day for Pescara.

It was a shock for a side that had kept eight consecutive clean sheets in the league and conceded only seven goals all season.

However, one supporter made that bet on Napoli 5-1 Juventus, putting down €350 on the result at a betting company in Rome.

The big gamble paid off, as the unnamed fan pocketed €36,750 from his bet.

There was also another slightly less precise prediction in Naples, betting €100 on a large Napoli victory over Juventus and making a profit of €12,500.

Having given confidence to the Naples following his goal prowess in the ongoing season, the lanky striker will be aiming to continue banging goals when his team host Cremonese for the Coppa Italia Round of 16 tie on Tuesday.

The 24-year old goal poacher who is currently the league leading goal scorer, has netted twelve goals with three assists in 14 featured games.