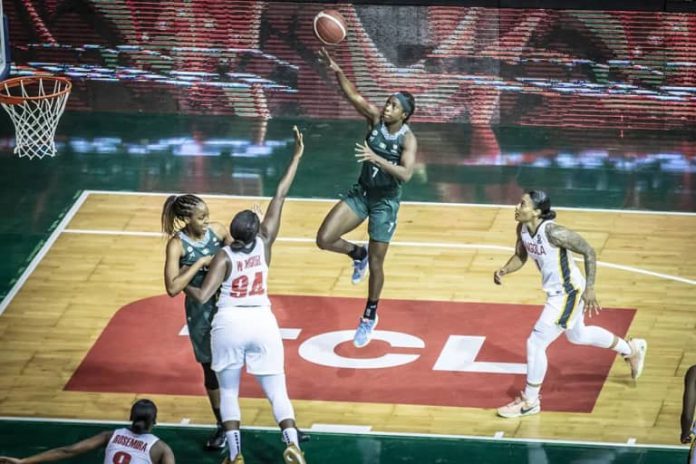 Nicole Enabosi’s buzzer beating 3 pointer in the 2nd quarter was one of the highlights of the day as D’Tigress of Nigeria enjoyed their second successive win in Group B against Angola to qualify for the quarter finals at the ongoing Afrobasket Championship in Yaounde Cameroon.

D’Tigress scored 36 points off the bench to top Angola 85-65.
Landerneau BB Point Guard Ezinne Kalu was the top performer for Nigeria once again dropping 12 points, leading 4 other D’Tigress players with double figures, ( Promise Amukamara 10 pts, Odera Chidom 10 pts, Adaora Elonu 10 pts and Amy Okonkwo 10 pts). Ify Ibekwe gave her all in the game, adding 9 points alongside brilliance from both ends of the court, despite a little injury scare at some point in the encounter.

If not for Italee Lucas, Angola would have probably conceded more than a 20 point margin, the former scored a game-high 19 points for Angola in a game they had little or no answers to D’Tigress splendid performance.
Former Ruzemburok FK player, Nicole Enabosi enjoyed her best game in the Green White Green colours, recording 9 points 4/4 FG and 1/1 3-pointer.

The last time the No.1 team in Africa lost a game on the continent of Africa was during a nail-biting Women’s AfroBasket SemI-Final against Cameroon on October 2, 2015. Since then, D’Tigress have accrued to a 19-0 winning streak in Africa.