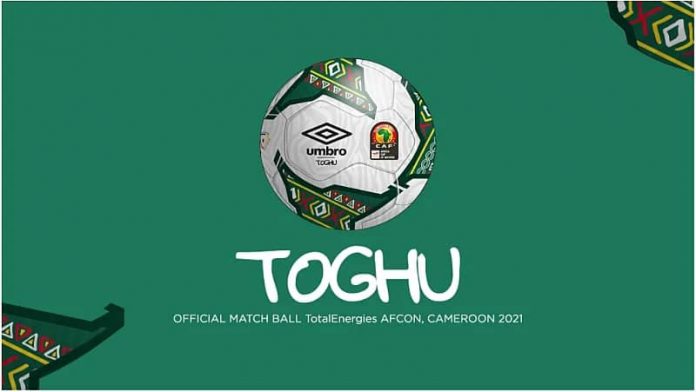 The Confederation of African Football CAF on Wednesday unveiled the official match ball for the 2021 Africa Cup of Nations  tournament billed for Cameroon in January 2022.

The ball named “Toghu” and designed to celebrate the special traditional outfit of Cameroonians, will be used by the 24 teams during the 52 matches to be played at the tournament.

Designed to meet the highest standards in the game, the ball features simple technological features including a smart panel configuration and it’s FIFA-approved to be used at highest levels of the game.

The Super Eagles of Nigeria will open their AFCON campaign against  Egypt on January 11, at the Roumdé-Adjia Stadium in Garoua.
Drawn in group D, Nigeria, Egypt, Guinea-Bissau and Sudan will all be in the same boat during the TotalEnergies Africa Cup of Nations scheduled in Cameroon from January 9 to February 6, 2022 .