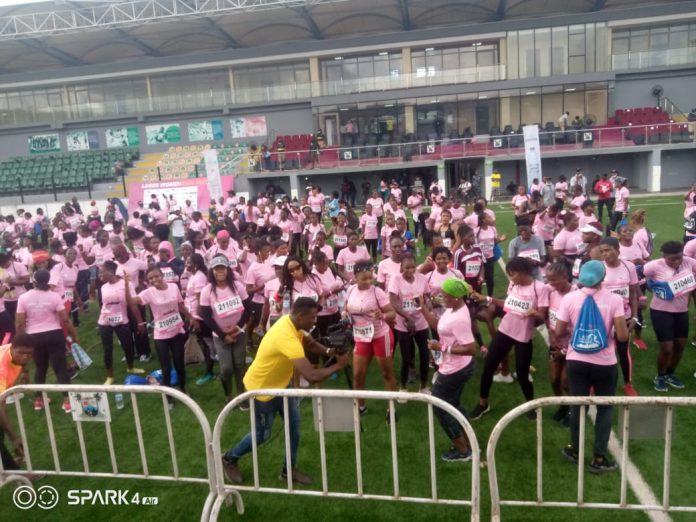 In the Open category, Abiye Joy David at a time of 33 minutes 41:4 seconds grabbed the title of the 6th Lagos Women Run after she broke away from the bunch three kilometres into the race and led all through the remaining 7 kilometres on the flat surface route running from the mainland of Lagos to the Lagos Island.
The experienced Ondo state runner who placed third in last year’s run got a cash prize of N1 million for her efforts.

In the veteran category, Nigeria’s top athlete Janet Dung from Plateau state emerged champions at a time of 40 minutes 05:8 seconds. In second place was Comfort Ekanem from Ogun State at 43 minutes 44:9 seconds, while in third place was Ladi Henry from Plateau State at 45 minutes 40:6 seconds.

Over three thousand runners participated in the actual 10km race which started from the Iyun Road end of the Funsho Williams Avenue, and ended at the Mobolaji Johnson Arena, Onikan, while another one thousand participated in the virtual race on the official Lagos Women Run internet App as the Covid-19 restrictions were observed.

The main entertainment of the 2021 Lagos Women Run took at the finish line, the Mobolaji Johnson Arena, Onikan where all the
Over three thousand runners covered in front of ceremonial platform, where the closing ceremony anchored by Muyiwa Osinaike and Uthman Okunnu, was filled with entertainment.

The Lagos Women Run 2021 got a huge boost with the active participation of the guests of honour in the closing ceremony.
The wife of the Deputy Governor of Lagos State, Mrs. Oluremi Hamzat and the first woman Managing Director of Shell Petroleum, Mrs. Andoni Elohor.

The duo at different times of their introduction danced with the multitude of runners at the main bowl of the Mobolaji Johnson Arena to the admiration of all the participants.

All the participants that crossed the finish line got medals and certificate of participation.

Egyptian To Bid For 2036 Olympic Games