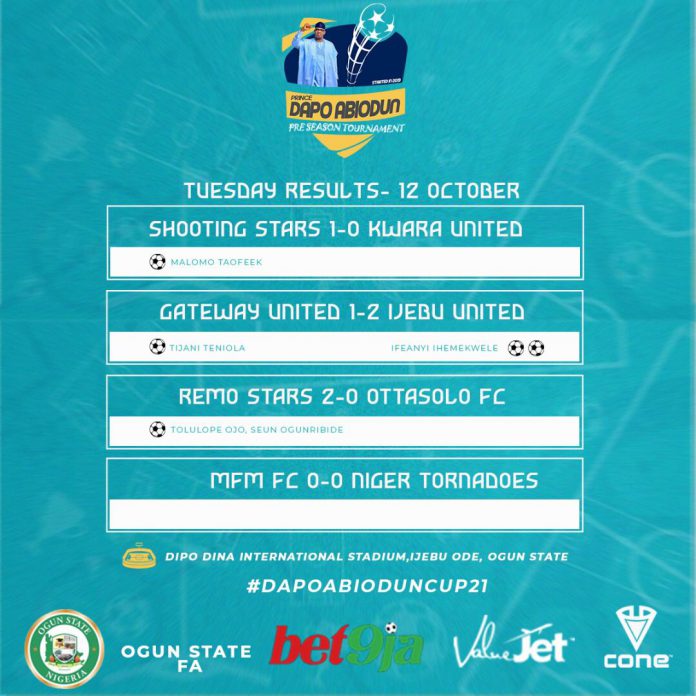 Shooting Stars kickstart their title defense on a winning note with a 1-0 win over Kwara United. Both sides had their chances but failed to convert in the first 45 minutes.

Oluyole Warriors started strong in the second half and broke the dreadlock with a fine header from Malomo Ayodeji in the 47th minute.

An entertaining affair between Gateway United and Ijebu United in a local derby which produced three goals. Ijebu claimed a 2-1 win against Gateway with all the goals coming in the first half of the game.

Remo Stars cruised to a 2-0 win over Ottasolo FC. The sky blue stars started strong after hitting the post early in the game from a Dayo Ojo’s freekick.

Tolulope Ojo opened scoring with a well placed shot in the 70th minute after Qudus Akanni played a fine cross from the right. Seun Ogunribide sealed the win, after scoring a sumptuous freekick in the 90th minute.

It ended a stalemate between MFM FC and Niger Tornadoes in the last game of Matchday One. Niger Tornadoes almost claimed all three points in the final minutes of the game but a goal line clearance from Chinonso Michael ensured the match end in a draw.

POST-MATCH INTERVIEW:
Remo Stars coach, Gbenga Ogunbote spoke about the qualities of his team after their 2-0 win over Ottasolo FC.

“We have talented, quality, and young players, we are working to make a big statement in the season. We are a work in progress. The tournament has high quality and it offers a good opportunity to continue working with the team”.

The tournament sponsored by Bet9ja and Value Jet is an initiative of Otunba Tade Azeez, President Nigeria Referees Association.