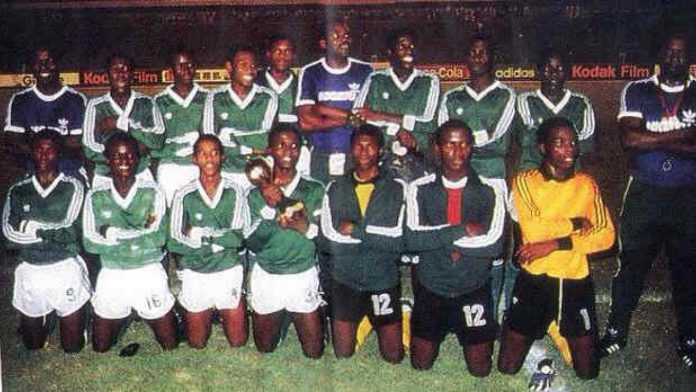 Former Junior internationals, Joseph Babatunde and Victor Igbinoba, have called on President Muhammadu Buhari to review the reward he approved for members of the 1985 Golden Eaglet following the three-bedroom flats awarded to the 1994 set of Super Eagles.

The 1985 Golden Eaglets, in 2016, were rewarded with a sum of N2 million each for their victory in China when they defeated the then West Germany 2-0 in the final to win the maiden FIFA Under-16 World Cup sponsored by Kodak.

Babatunde and Igbinoba, who spoke on behalf of the team, told The Guardian that the players were not happy over the reward, which, according to them, did not reflect the magnitude of their victory. They said that a house gift to each player would have been valuable.

“Till today, many of my teammates are not happy that the government prevented us from travelling to play for clubs in Europe to make money for ourselves like the current players are doing. Some of us had offers in English Premiership clubs and the rest in other countries abroad, but we were denied permit because the government labelled us properties, hence we were prevented from fulfilling our dreams.

“This and some other denials is the reason why our father, President Buhari should also compensate us with a house as he did to the Super Eagles of 1994 that won the Africa Cup of Nations. Even when President Buhari told us to come for the 1985 World Cup feat reward, my flight ticket alone on business class to and fro New York to Abuja was over N2 million,” they said.

“And the question you ask yourself is what can you do with N2 million? That is the amount we got from President Buhari and we were not happy at all. Only few of the things they promised us were fulfilled like naming of streets after us and to watch the 1986 World Cup in Mexico.

“The full scholarship to higher institution, government treasury bonds, cars, houses for each players and the tour of the whole country for every state government to reward us were never fulfilled. The list of all these promises was documented in the media when we arrived from China in 1985.

“All what the Golden Eaglets of 1985 set is saying is the best way we can be rewarded for our success as the first team to win the World Cup for the country is for government to also award us a house as compensation. Each member of the 1980 Green Eagles got a house and recently the 1994 were given too and we think we too should be rewarded likewise,” he said.

Collaborating what Joseph said, Igbinoba stated that the 1985 set Golden Eaglet actually opened the door for the Nigerian players in Europe.

“I am speaking on behalf of my teammates of the 1985 Golden Eaglets set. I can tell you we not happy over the N2 million given to us by the government. We had expected President Buhari, who is our father to give us a house just as the past governments did to the 1980 Green Eagles for winning the first Nations Cup and then the recent houses given to 1994 set of Super Eagles for also winning the Nations Cup.

“At least for being the first team to win the World Cup for the country, I think we too deserve to receive a house. Though we were said to be very young at the time we won it in 1985, but since the leader we won it under back then is now the president, we had expected a house at least since they compensation came 31 years after because we are no longer babies.

“Our exploit at the Under-16 World Cup later paved way for Nigerians going to Europe as professionals. Many of us were not allowed to play in Europe because we were named as government’s and denied permit to further our career. This stance by the government back then destroyed a lot of promising talents that should become stars worldwide.

“Some of us passed the trials we were made to go through, but when it came to playing for those clubs after they were satisfied with our performance, the government refused to give us permit through the NFA that was acting on instruction. We are of old age now, and the only legacy our father Buhari can bequeath us now is a house and we will all live to cherish this for the rest of our lives,” he stated.