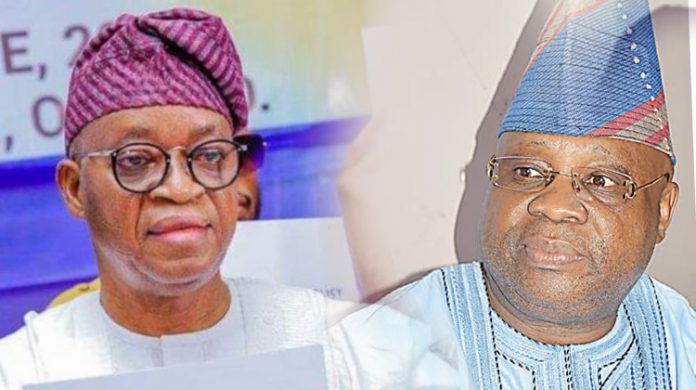 The Osun State Governor, Mr Adegboyega Oyetola, who is before the Osun State Election Petition Tribunal over the results of the governorship election in the state, has sought the adjournment of the matter.

However, the decision to seek adjournment by the plaintiff was rejected by the respondents’ counsel, who urged the tribunal to dismiss the petition for lack of preparedness.

At the resumption of hearing the matter, counsel for the plaintiff, Mr Saka Layoonu (SAN), informed the panel of a subpoena dated November 3 and filed on November 8 for service on the Osun REC, which he was to tender before the court in Form CF001, which contained certificates and other documents of the 2nd respondent, Senator Ademola Adeleke, the governor-elect and candidate of the Peoples Democratic Party.

Layoonu also stated that the plaintiffs were unable to serve the REC and requested that the case be adjourned so that the summons could be served on the INEC’s chief officer in the state.

Ananaba said the REC that was being summoned was not listed in the petition, adding that the day’s sitting marked 104 out of 180 days constitutionally given to the panel to hear and adjudicate on the matter.

Mr. Niyi Owolade and Nathaniel Oke, SAN, representing Adeleke and the Peoples Democratic Party in the matter, both aligned with the submission of Ananaba and urged the panel to dismiss the petition.