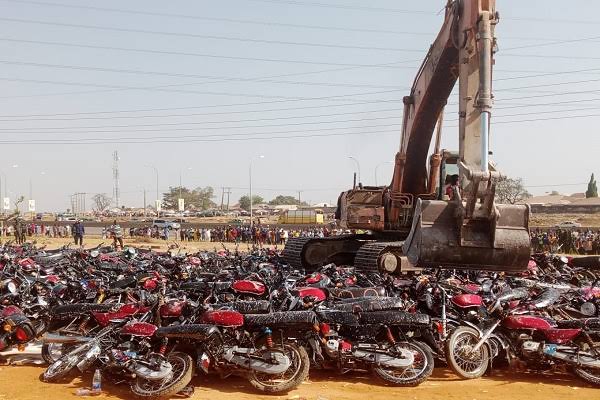 The joint enforcement team of the Federal Capital Territory Administration FCTA has crushed 432 motorcycles recently seized from violators of its ban on activities of commercial motorcyclists.

In particular, the team accompanied by operatives from Police, military and paramilitary caught the violators unaware, confiscating 432 of the bikes.

Top officials of FCTA, and heads and representatives of various security agencies including paramilitary organizations domiciled in the FCT observed the crushing exercise, which took place inside an open space at Lugbe Car Wash, along the Airport road corridor.

The Secretary, FCT Transportation Secretariat, Abdullahi Adamu Candido, affirmed that the government would not relent in its effort to rid the city of the menace.

The Director, Directorate of Road Traffic Services (DRTS), Abdulateef Bello, also said the exercise, which is the third in the series of its signature enforcement of the ban on okada operations in the city, is a proof of its zero tolerance of the menace.

According to him, their continued insistence to operate in the city is no longer a traffic offence, but a serious security breach that required the intervention of the government, hence the involvement of military and paramilitary agencies to effectively tackle it.

Biden to host PM Modi for state visit in June or...