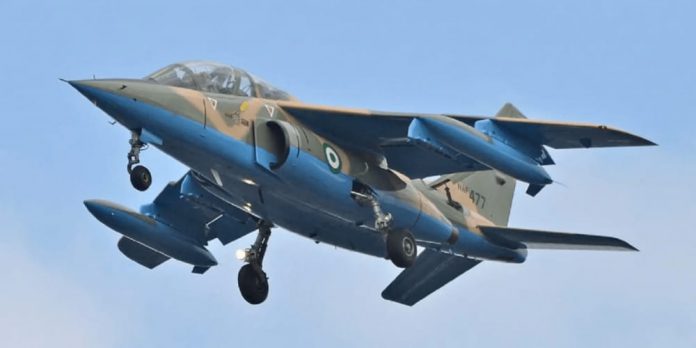 Not less than 64 people were reportedly killed in an airstrike by a Nigerian military plane on Sunday at Mutumji Community in Maru Local Government Area of Zamfara State.

It was gathered that many of those killed were armed militants while others were civilian residents of the community.

The victims, including women and children, were killed when a plane bombed the community while chasing fleeing bandits who reportedly invaded the town.

On Saturday and Sunday, the Nigerian Air Force responded to distress calls from locals following armed bandits’ attack on Malele, Ruwan Tofa, and Yan-Awake communities in the area.

Residents said the attack on the three neighbouring communities was adequately foiled by the air raids which forced the rampaging gunmen to flee into the neighbouring Mutumji community for safety.

A resident, Nuhu Dansadau, however, said the strikes by the air force on Mutumji affected several locals killing at least 64 people and injuring 12 others.

Mr Dansadau, who is a member of the International Human Rights, Crime Control and Conflict Resolution, said the injured victims were being conveyed to Gusau, Zamfara State capital for medical attention on Monday morning.

Ruto says he won the election fair and squre, tells off...

BREAKING: Senate confirms Onochie, others for NDDC Board