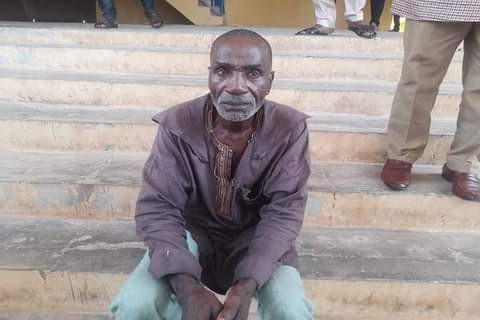 A 64 -year-old man, Joseph Ojo, who set his five stepchildren ablaze said he carried out the action because the victims joined their mother to allegedly beat him during a misunderstanding.

One of the children was burnt to death in the inferno while two others passed away at the hospital.

Speaking during his parade at the State Police headquarters in Akure on Wednesday, November 9, the suspect claimed his wife instigated her five children against him after giving her N600 to prepare food for him and the family.

Ojo alleged that his wife usually starved him of food, even when he provided money for her to cook for him and the family.

He, however, said the woman failed to prepare food for him and this led to a misunderstanding between him and the wife while the children allegedly took turns attacking him.

“The one I married last if I give her money and she buys food, she does not give me food. She does not wash my clothes. She always fights me, despite giving me money.

“We have been together for two years. She and her children used to fight and beat me. They are always fighting. She will not fetch water for me. She fights the whole street. She always fights me alongside her children. They always beat me.