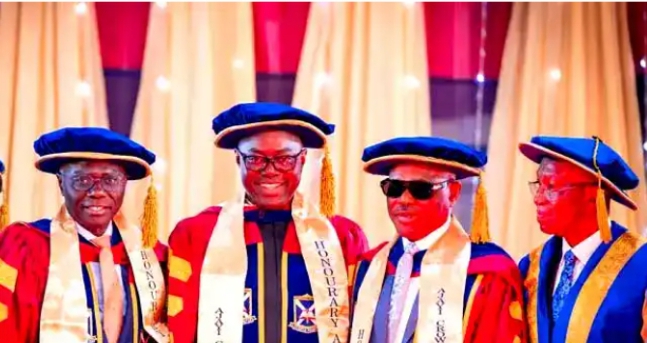 The trio were awarded the degrees during the grand finale of the 14th convocation of the university, held at the University Hall in Oyo.

A statement by the Chief Press Secretary to Governor Makinde, Mr. Taiwo Adisa, indicated that Governor Makinde, who spoke on behalf of the three governors, lauded the Ajayi Crowther University for contributing immensely to the development of Oyo State.

This was as he stated that the institution has lived up to the expectations by showcasing the great ideals of the late Bishop Samuel Ajayi Crowther, after whom the institution was named.

The governor appreciated the management of the institution for counting him and his colleagues worthy and for bestowing the honours on them, pledging on behalf of the honourees, that they would support the institution.

He equally admonished the graduands to always remember where they are coming from, charging them to always exhibit what they have learnt in the institution in their life endeavours

He said: “I want to thank the Senate and Governing Council of Ajayi Crowther University for the honour you bestowed on us today; the conferment of Doctorate Degree (honoris causa) on us. I came in as an Engineer and went out with a doctorate degree.

“Well, let me use this opportunity to congratulate the graduates of yesterday and today. For most of you, it is a journey to taking a very big leap because some of you will not come back to school but join us in the real world. In the controlled environment here, you can basically predict how things roll but when you come out there, it is a different ball game.

“Today, you also should be ready to take up further responsibilities. Whatever your plans are, this University has done its part to give you the necessary academic and moral training. So, I beseech you to always remember where you are coming from.

Our Covid interventions were approved by Parliament – Govt on Auditor...