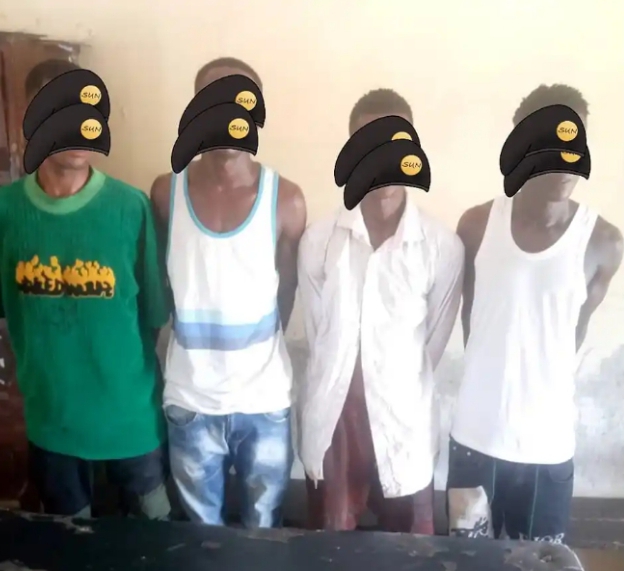 The Delta State Police Command has arrested four suspects over the murder of a 30-year-old businessman, Dominic Uguru and his friend, Jagbo

The incident occurred on Wednesday night, November 16, 2022, along NDDC road in Sapele area of the state.

Uguru, an electronics dealer was at home with Jagbo when the four suspects, Bright Osifo, (23), Goodness Obade,(30), Obunwa Kasim,(25), and Ogadinma Francis (27) broke into his house at about 11pm and demanded the sum of one million naira from him.

It was gathered that Uguru could only transfer thirty six thousand naira hence they killed him and his friend.

Spokesperson of the command, DSP Bright Edafe, who confirmed the arrest in a statement on Sunday, November 20, said that the prime suspect, Ogadinma Francis confessed that he conspired with the other suspects and killed Uguru for refusing to pay him for a job done.

“Following report received by the DPO Sapele Division from a distress caller (name withheld), that on 16/11/2022 at about 0900hours, he discovered that his landlord named Uguru Dominic ‘m’ aged 29yrs and his male friend name and address not known were found dead in the bathroom, suspected to have been murdered by unknown persons, and that the suspect made away with the victim’s Toyota Corolla car with Reg no. ABJ 271 white in colour,” the statement read.

Japan’s fans clean up stadium after win over Germany