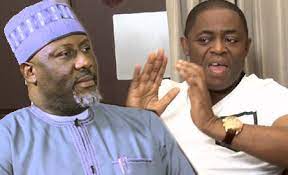 It is not news that FFK and Dino Melaye are sworn enemies. The two haven’t ceased to troll each other at any given opportunity.

In their latest online drama, FFK has accused Dino of bisexual.

FFK took to Instagram where he accused Dino ofspreading his buttocks and playing rear guard receiver for Sodomy United.

“YOU MAY NOT LIKE ME MUCH BUT UNLIKE THE AGBERO CALLED DINO ONE THING I WILL NEVER DO IS SPREAD MY BUTTOCKS AND PLAY REAR GUARD RECEIVER FOR SODOMY UNITED”.

On his comment section, many of his followers expressed disappointment at playing dirty political game he plays with Melaye.

One Phamer wrote, “Look at what old men are doing on the internet, later they will respect from the younger generation

One Hotgris Luxury lingerie wrote, “You don’t have shame sir

One giwill wrote, “It’s a shame a former minister is this sinistrous n using vulgar words ti challenge an opponent all in the hope of siding a political position when his desired candidate wins…it’s a pity that his literacy is to expose his dirty lining in public

We are not recruiting, avoid fraudsters, WAEC warns