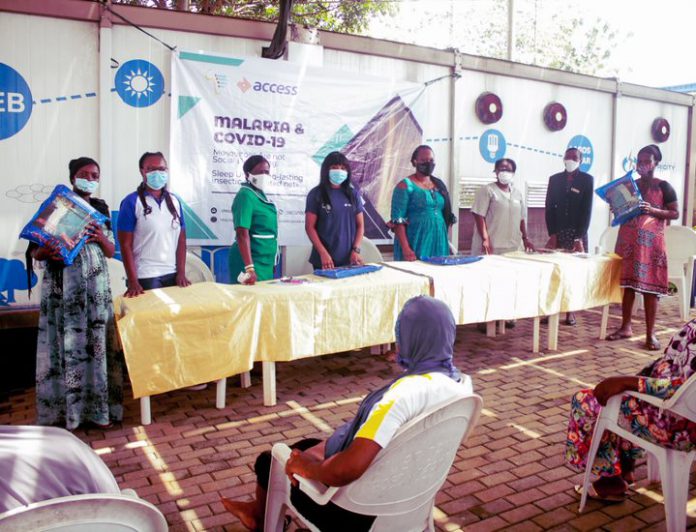 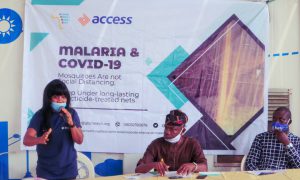 With support from Access Bank Plc, the Corporate Alliance on Malaria in Africa (CAMA) held a Malaria Intervention Initiative in 5 communities in Oyo, Ogun and Lagos States recently.

The intervention which keyed into the strategy of the National Malaria Elimination Programme (NMEP) in Nigeria to end malaria-related deaths amongst pregnant women and children under 5 who bear the greatest brunt of malaria deaths in Nigeria and Africa.
Majorly targeted at pregnant women in the affected communities CAMA, sensitized the community on the need to prevent Malaria by using insecticide-treated nets, keeping their surroundings clean and ensuring they visit a hospital when they feel unwell, even as they were urged to stay safe from the deadly Corona Virus.
The Initiative, held in partnership with HACEY, a non-profit, raised awareness on malaria prevention and treatment, in addition to raising awareness on the need to stay safe during the COVID-19 pandemic. The intervention which reached over 5,000 pregnant women and mothers with children under 5 also provided about 1,600 pregnant women with long-lasting insecticidal nets (LLINs) in Ogooluwa, Eredo and Iberekodo in Lagos, Aremo and Oke-Ado in Oyo state and Ibafo in Ogun state. Through the initiative, healthcentres in these communities also received donations of LLINs.
Speaking on the event, Hon. Wasiu Taiwo, Vice Chairman, Eredo LCDA, Epe thanked Access Bank and CAMA for holding the event in Eredo, citing the need for pregnant women to be educated on the use of Mosquito nets as timely. He stressed that while the government was doing a lot, private sector collaboration with government efforts is needed to turn the tide in reducing maternal deaths and malaria-related deaths in communities like Eredo. 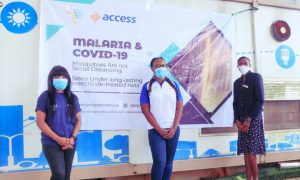 CAMA’s Country Representative, Ms Ochuko Keyamo, said “we know that this is a trying time for everyone, especially pregnant women in suburban communities. This intervention is aimed at reminding people of the importance of combatting malaria even while staying safe from COVID-19 by providing the necessary information and support for people in the selected rural communities. At CAMA, we remained committed to galvanizing private organizations to support national policies on ending Malaria.”

In addition, the intervention also organized a door-to-door awareness campaign and a social media campaign on preventing malaria and getting the right treatment for malaria. The campaign also encouraged visiting hospitals for tests for fevers over self-medication and taking the right steps to stay safe from Malaria and COVID-19. Over 200,000 people were reached through the online campaign by the intervention.

Head of Sustainability, Access Bank, Mrs Omobolanle Victor-Laniyan, said the malaria intervention was very important and timely. “Malaria not only hurts families, but it also hurts businesses and the entire economy. As a member of CAMA, we have, over the years invested in and galvanized efforts amongst the private sector to end Malaria in Nigeria, working to complement existing government efforts.”

A participant and beneficiary, Mrs Halimo Keshinro of Ibafo, thanked CAMA and Access Bank for the laudable initiative as she said “I did not know a lot of things about malaria and how pregnant women can stay safe during the COVID-19 pandemic until now. But this programme has opened my eyes to a lot of things.

“I had stopped going to the hospital because of COVID-19 but at this program, I learnt that it is ok as long as I take the necessary precautions such as using my facemask and washing my hands before touching my face.”

Established in 2006, the Corporate Alliance on Malaria in Africa (CAMA) is an initiative of GBCHealth to channel private-sector efforts to drive impactful partnerships for malaria control and elimination in Africa from workplaces to communities