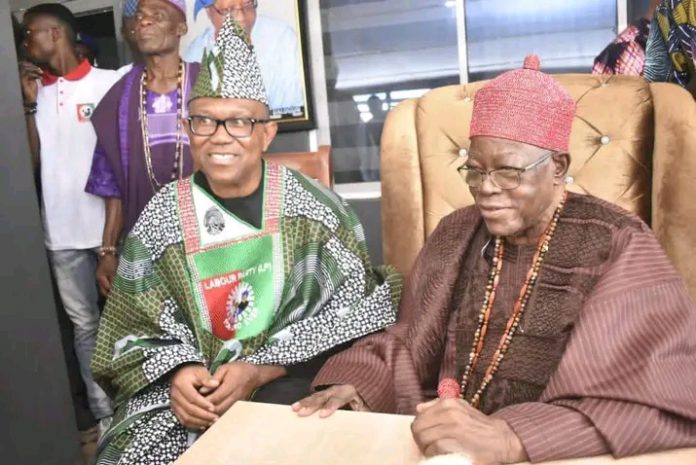 The monarch and members of his Advisory Council described the claim as false and self-concocted to mislead the general public.

The LP presidential candidate led his campaign team to pay a courtesy visit to the Olubadan, last Saturday, and some of the members of his Advisory Council joined to receive Obi at the Alarere residence of the monarch.

In a viral video being widely circulated by Obi’s handlers, Chief Eddy Oyewole was seen praying for the success of the LP at the polls.

But reacting to the endorsement, the Olubadan, in a statement, said: “The attention of the palace of Olubadan of Ibadan land, Oba Lekan Balogun, Alli Okunmade II has been drawn to the claim of endorsement of the Labour Party, LP, presidential candidate, Mr Peter Obi by the monarch and his members of Advisory Council, a claim described as false and aimed at misleading Nigerians.

“The palace could have ignored the report and dismiss it with a wave of the hand, but with the torrents of inquiries by some of our credible media houses seeking clarification before publishing and the need to counter social media trending of the foul report without professional touch, this reaction becomes imperative.

“How could anybody, in his or her wildest imagination, assume that a presidential candidate of any political party would receive an open endorsement from a place like the palace of Olubadan? That must be a crude joke carried too far. It is preposterous, to say the least.

“While discountenancing the claim of endorsement by the Olubadan Advisory Council, politicians are counseled to please leave the palace out of their game.”