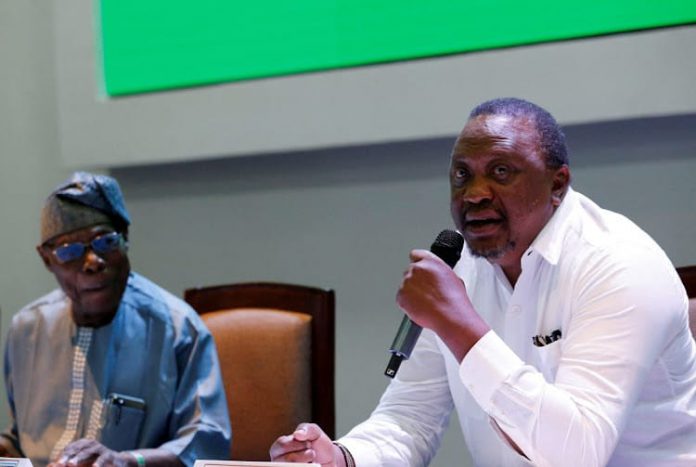 The former President of Kenya, Uhuru Kenyatta has called for urgent intervention in the Democratic Republic of the Congo, where fighting between the army and M23 rebels has flared again in the last week causing hundreds to flee their homes.

During a visit to the city of Goma, in eastern Congo, and a nearby camp for displaced people, Kenyatta encountered tens of thousands of people living rough on roadsides.

Congo accuses Rwanda of backing the M23, an allegation supported by “solid evidence”, according to UN experts. Kigali firmly denies any involvement.

Kenyatta was visiting Congo as regional bloc East African Community (EAC) facilitator and AU peace envoy, aiming to cool tensions between the two countries, and end the conflict unfolding along their shared border.

Minutes before Kenyatta’s visit to the Kanyaruchinya camp outside Goma, unknown people in Congolese army fatigues shot in the air, causing panic and thousands of people to flee, a Reuters journalist said. The army and rebels blamed each other for the incident.

Kenyatta’s work has been “severely hampered by the unfolding dreadful humanitarian crisis in and around Goma”, Kenya’s ministry of foreign affairs said in a statement.

Earlier this month Kenya deployed an unknown number of troops to eastern Congo to join an East African regional force tasked with ending decades of bloodshed.

Kenyatta said rebel groups and their backers had not honoured pledges, made at peace talks earlier this year in Nairobi, to remain in their positions.

Despite billions of dollars spent on one of the U.N.’s largest peacekeeping forces, more than 100 armed groups continue to operate across large swathes of east Congo.

Jeff Nyagah, the Kenyan commander of the new EAC force, said the diplomatic process was the priority, alongside disarmament and demobilisation of armed groups.

“If those two tracks fail, we will of course use the force during a joint operation with the (Congolese army),” he told a news conference in Goma.