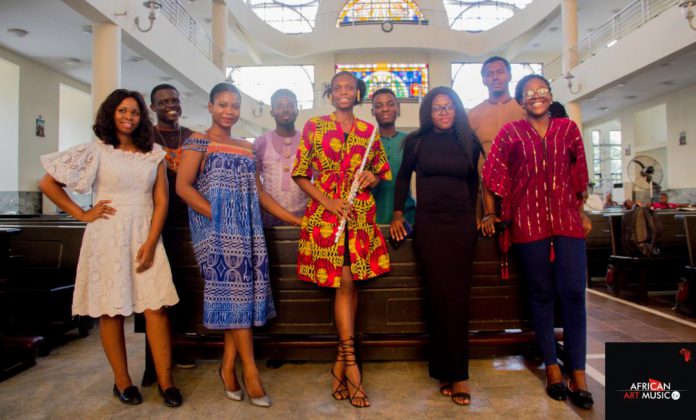 Despite several musical genres available for listening to human beings, some young classical musicians have renewed their hope to change the narrative in the classical music industry, particularly in Africa and beyond.

In separate exclusive interviews with NewsAfricaNow, Jennifer Maduka said the kind of music that she sings unites people, adding that those listening to her song would feel the basic contents of what she’s singing. She added that she is so passionate about music, noting that whenever she is sad she listens to music or sings to ease off all the stress.

Maduka said: “My kind of music is music that is quiet and peaceful, like not too many things going around during a performance or during a competition. It is also a song that unites people and that has the basic content that people can relate to and enjoy themselves.

“I am also passionate about this music because it is what makes me happy; it is my happy place, it is my comfort zone and whatever I am going through in life I just wanted to ease off I just sing or I listened to music and that is why I am passionate about music.”

Tope Olagunju who came from a musical background said he listened to different genres of music while growing up which he said were not classical.

Olagunju added that while listening to all kinds of genres of music, he was not inspired because he didn’t see any big deal in it. He also explained that it was the concert that he went to in 2008 in Ibadan, the Oyo State Capital that brought him to the limelight when he connected with people of timbre and calibre in the classical music industry.

“I grew up listening to a lot of genres of music like jazz, classical, acapella music, etc. But I discovered that even as a child growing up and listening to all these kinds of music I wasn’t inspired because as Nigerians will say in parlance “see finish” as I was so used to the music in the house because I didn’t see it as any big deal until I went for a concert.

“I won’t forget 2008, Resurrection Voices directed by Dotun Olayemi in Ibadan, and that concert changed my life and that was where I got the inspiration and also moved close to the right people who pointed me in the right direction,” Olagunju stated.

For Temitope Aina, three things that kept her going in the classical music industry which is passion, determination, and practice.

According to her, she always wants to be the best by becoming a sought-after pianist that would be known all over the world, stressing that she wouldn’t mind collaborating with some of her mentors in the classical music industry.

She said: “First of all, there are just three things that kept me going which are passion, determination, and practice. I was so determined, committed, and disciplined and I always wish to be the best.

“I want to be a professional pianist which will be known all over the world and would like to collaborate with some of my mentors in the classical music industry.”

Also speaking, Mary Falodun who is an organist said she doesn’t have the intention of studying music as a career but fate made it possible for her because the course she wanted to study didn’t come through due to a particular subject she did not have to pursue her dream course.

She stated that during her musical career, her mum didn’t support her a bit, adding that it was when she was practicing in school that her lecturer connected her with another professional organist who in turn trained her to become what she is today.

Falodun said: “When I got to Adeyemi College of Education, the school gave me History/English. On the day of the screening, the school discovered that I did not have Government in my O’Level and they had to change it to another course so far I don’t have government; they now gave me Music/English. My mum advised that I should do the Music/English for the first year and that I am going to rewrite another JAMB and put in for another course through a degree programme and not NCE which was our plan together. After my first semester, I was still doing the music as I am still going to leave which is not what I want to study.

“After the second semester, I now discovered that this music is very interesting and I can build myself in this career as a major aspect I want to do. Later, after my second semester, another JAMB came out and my mum told me to get the form I told my mum that I am not going to buy any jamb form that I am going to finish this NCE and that was how I and my mum quarrel and I told her I am not going to write another jamb but I am going to finish this NCE.

“When I got to a level my mum insisted I shouldn’t go to practice because I don’t ask them for money and transportation in Ondo state is not that expensive as Lagos. I usually forgo my afternoon food and use the money to go for practice and even when people are travelling home I don’t usually go home because I used that period to practice in the school hostel.

“Whenever I come back home she will lock her door and tell me to go back to where I am coming from. A friend of my mum who is a staff of Adeyemi College of Education collected my mum’s number and speak to my mum that she should leave me alone that I didn’t go anywhere that I do come to school to come and practice that she should leave alone so far I have chosen my career. Though she doesn’t support my music career”

Corroborating Baritone’s statement, Tobi Balogun, who is an organist noted that he will use the money to impart knowledge to younger generations through the establishment of a music academy.

“I will use the money to build a music academy to give back to society in terms of organ playing and training. I wished to impart knowledge to the younger generations especially teaching professional organ playing,” Balogun noted.

Highlights of the event are the rendition of classical songs by each of the musicians.