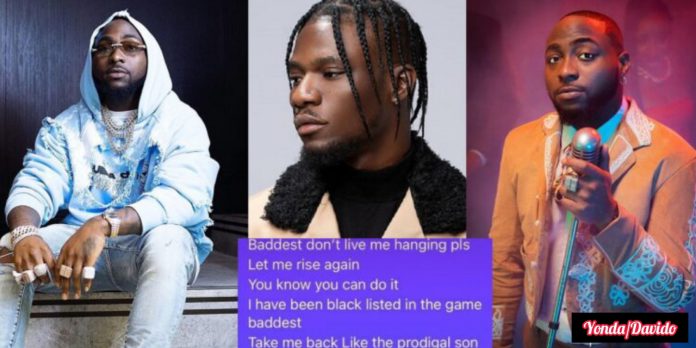 Nigerian singer and music executive, Davido has reacted after his former signee, Yonda, apologized for betraying him.

It would be recalled that in 2021, Yonda, who was formally signed to Davido’s record label, Davido Music Worldwide, a.k.a. DMW, announced his exit from the label.

At the time, he accused the DMW boss of violating him and said he decided to leave because things were not working for him there.

In another interview, he claimed that his song was the cause of the beef between his ex-label boss, Davido, and Burna Boy.

He, however, recently made a U-turn and apologised to Davido for betraying him.

Yonda posted a screenshot of the apology message he sent to Davido on his Instagram page and pleaded for his forgiveness.

In the chat, Yonda asked the DMW boss to temper justice with mercy and not leave him hanging because he has been blacklisted from the industry.

While reacting, the 30BG boss, who has been severally hailed by fans and colleagues for his good heart, said he misses Yonda and was greatly hurt by his actions.

“I miss you too, you hurt me”, Davido responded.