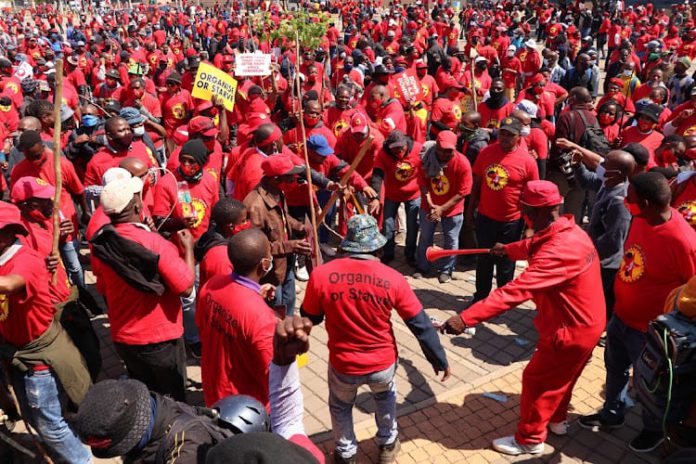 South Africa’s trade union federations and unions affiliated to them are to commence a national shutdown today despite the ‘no work, no pay’ principle.

According to the Congress of SA Trade Unions (Cosatu), the national strike was in response to load-shedding, fuel price hikes and escalating food prices.

“This socioeconomic strike also represents a push back and a response by the workers to the ongoing class warfare directed at them by both public and private sector employers,” Cosatu started.

The Public Servants Association (PSA), which represents more than 235,000 public-sector employees, said it is in full support of the national shutdown.

“Growing frustration in the country is mainly ascribed to certain government policies that only benefit the country’s elite, while the unemployed, the poor, and middle-class workers are slipping deeper into despair.

“The current food-basket price alone has increased by 14% in 2022. Despite this, government is offering a mere 2%-salary increase to its employees,” PSA said.

Meanwhile, the department of public service & administration said the principle of “no work, no pay” will apply for absence for a full day as well as part of a working day for public sector employees who will embark on the strike.

The department said while protest actions are protected by the Labour Relations Act, those employees who fall within the essential services are prohibited from participating in protests during working hours.

The Assembly of the Unemployed said it will be joining the national shutdown to demand tangible solutions to the country’s economic crisis.

“It is deplorable that 28 years into our democracy, the poor and the marginalised continue to live in inhumane conditions,” the group lamented.

Poll puts Bulgaria ex-PM Borisov back on top but short of...

Teenager allegedly stabs Friend to Death over Phone in Adamawa