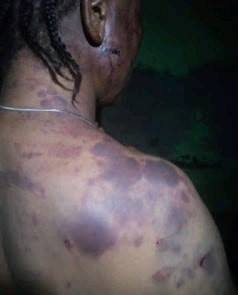 A mother-of-five, Beatrice Mbari, has called for justice after she was allegedly beaten to pulp by her husband following a disagreement with his lover in Bundu Ama community, Port Harcourt, Rivers State capital.

Speaking to journalist in Port Harcourt, the distraught woman said she could hardly see with her eyes due to punches the man threw at her.

According to Mrs Mbari, trouble started when her son confronted her husband’s alleged lover, simply identified as Helen, who later reported the confrontation to her husband.

Beatrice said as soon as her husband returned home, he allegedly dragged her around the kitchen, beat her mercilessly, and threw her out of the house.

She added that it was not the first time he was battering and assaulting because of his lover.

“My husband beat me and damaged my face. He punched me in the eye. I can’t even see clearly. He dragged me in the kitchen and said he will kill me and nothing will happen,” she explained.

“I was pleading with him to leave me. I asked him what I did. It was one of my neighbour that came to rescue me. He even drove her away. He stripped me and threw me outside. Since then, I and my children have been managing with my elder sister. That was why I arrested him yesterday.”

She said the matter was reported to the Central Police Station at the old Port Harcourt township, saying he has been arrested.

“I asked his girlfriend, Helen, why she told my husband what my son said about his father. I don’t know what the girlfriend told him. Because when he returned from her house, he started beating me. Helen is the reason my husband wants to kill me and my children, so that she will control the family.”

Sexual Enhancement Drugs Can Lead To Your Death – NAFDAC