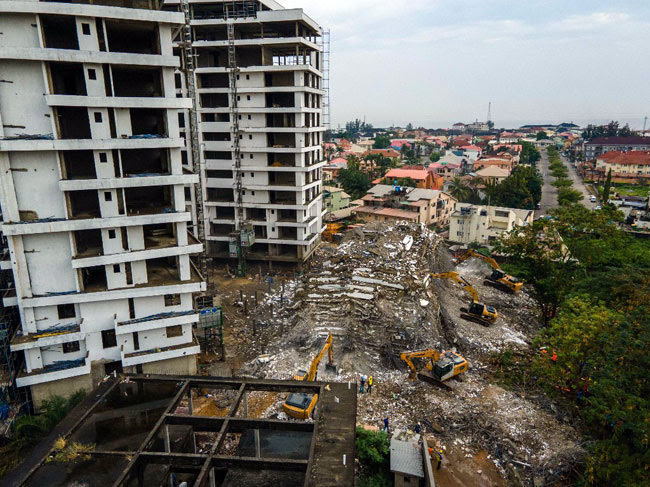 As at Friday morning, November 5, the death toll in the collapsed Ikoyi has risen to 40, which includes the dead body of the Developer, Femi Osibona.

An official of the National Emergency Management Agency, NEMA, who confirmed the development toTheCable at the site, said rescue workers recovered Osibona’s body on Thursday evening. The body was said to have been taken to the morgue

Meanwhile, Governor Babajide Sanwo-Olu has declared three days of mourning for victims of the collapsed building and inaugurated a six-man independent investigation team which was given 30 days to submit its report.

Recall that the 21-storey building crumbled around 2p.m. on Monday when workers were on the site.

The South-West Coordinator of the National Emergency Management Agency, Ibrahim Farinloye, had earlier confirmed on Thursday that 33 males and three females had been brought out dead from the rubble, bringing the total number of casualties to 38.

Farinloye added that nine people, including a female and eight males, were rescued alive.

Governor Sanwo-olu, who shared a picture of his visit to the hospital said: “I visited the survivors of the collapsed building this morning (Thursday), and gave them my word that they will get the best of care in the hospital, and will not be discharged until they have been given the all-clear by the medical team attending to them.

“As much as we sympathize with all concerned, we will also ensure that we are open and thorough in investigating the cause of the collapse.

“In that regard, a high-powered professional investigative panel has been set up, whose membership consists of professionals outside of the government. The panel, which is headed by the President of Nigeria Institute of Town Planners, Toyin Ayinde, has been given clear terms of reference, with a 30-day assignment to tell us what went wrong at the site.

“The panel’s terms of reference also include ascertaining whether there was a compromise of the building codes by the developer, his contractor, and statutory regulatory agencies.”

Speaking about the 3 days of mourning in a statement by the Commissioner for Information and Strategy, Mr. Gbenga Omotoso declared, probe panel inaugurated

“All flags are to be flown at half-mast in public and private buildings and official engagements cancelled during the mourning period.

“Lagos State Government, once again, commiserates with all those who lost their loved ones in the unfortunate incident.

Meanwhile, in a report by Vanguard, a father, simply identified as Mr Abel, whose son is trapped in the debris and yet to be recovered, has made passionate appeal to Governor Sanwo-Olu to help recover the corpse of his son.

“They are unable to show me the corpse of my son that was recovered, because of some processes.

“So, I am confused as to what to do. I live in Abuja, what do I do? Do I go back or wait for them to contact me?

“The governor referred me to his special assistant but I have heard that he (my son) was here with his boss before the incident.

“He has completed his secondary education, and I didn’t want him to stay at home, so he started working here, the owner of the place approached me they wanted to bring him here to work, I am from Benue State, I live in Abuja, my name is Abel, my son’s name is Emmanuel Abel,” the worried father stated.