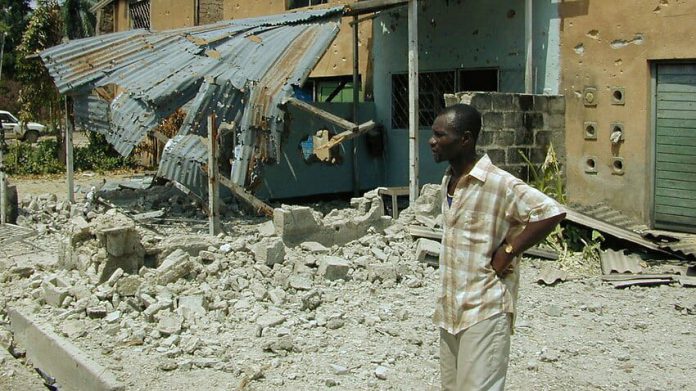 The International Court of Justice has ordered Uganda to pay $452 million in compensation to the Democratic Republic of Congo.

The International Court of Justice has ruled that Uganda must pay US$325 million ($452 million) in reparations to the Democratic Republic of Congo for its role in conflicts in DR Congo’s resource-rich Ituri province.

“The court sets out the total amount of compensation awarded to the Democratic Republic of Congo which is US$325 million,” presiding judge, Joan Donoghue said.

Uganda must pay the sum in five yearly instalments of US$65 million to start in September of this year, she added.

After lengthy proceedings, the court ruled in 2005 that Uganda had violated international law by occupying parts of the eastern DR Congolese province with its own troops and supporting other armed groups during a war that raged from 1998 to 2003.

Awarding DR Congo less than one-thirtieth of what it had demanded, the court acknowledged that Uganda was to blame for a “significant part” of the casualties in the war due to its “wrongful international acts”.

But judges said there was “insufficient evidence to support the DRC’s claim of 180,000 civilian deaths for which Uganda owes reparation” by being directly responsible.

“The court considers that the evidence presented to it suggests that the number of deaths for which Uganda owes reparations falls in the range of 10,000 to 15,000 persons,” said justice Donoghue.

Therefore, the court ruled on the final compensation amount on Wednesday.

Ruto, Raila turn to God as presidential vote-tallying gets underway in...

Insecurity: Every nation will go through these curves and difficult time...