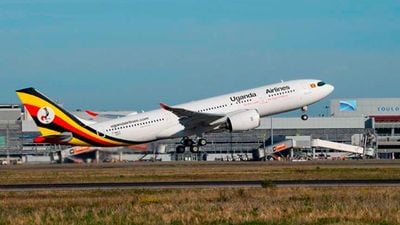 Uganda Airlines is reactivating plans to start flights to Heathrow, following an indication from authorities in the United Kingdom that it can operate the service through an intermediate airport.

The Ugandan carrier has been given intermediate airports in six countries in Africa and Europe, whose airports have a United Kingdom Civil Aviation Authority security clearance. These are Kenya, Algeria, Egypt, Ghana, Tunisia and Turkey.

This follows the carrier’s application for services to the UK receiving preliminary approval, while it would take the better part of two years for the UKCAA to complete its security vetting of Entebbe International Airport.

“In principle, we have two options – to wait until Entebbe International Airport has gone through a security audit by the UKCAA so that we can fly direct from there, or go through a third country whose airport already has the necessary clearances.”

She added that they have held internal meetings to see which of the third-country options suits their operations best and were now activating the arrangements they had previously made on the ground in the UK for a possible launch of services during the summer of 2023.

Barring unlikely concessions, the intermediate stop will be purely technical with the Ugandan carrier not allowed to pick up onward traffic. All passengers and crew on the flight will have to disembark and go through the passenger screening process at the intermediate before getting back on board.

“Kenya is a good option but, like Morocco, Turkey and Tunisia, it would involve some deviation off the regular flying track,” Ms Bamuturaki said.

Buhari condoles with AfDB president, Adesina on loss of mom