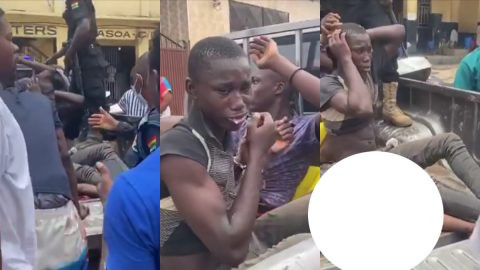 Two teenage boys have allegedly lured their friend to Volta Region and killed him for the purpose of money ritual in Ghana.

The police in Ghana have however arrested them on Saturday, April 3.

According to reports online, the young boys lured their deceased friend to Volta Region where they killed him and were in the process of taking his body to a herbalist when they were apprehended.

In a video which went viral on social media, the boys were seen handcuffed in the back of a police van as police officers prevented them from being lynched by a mob.

The bloodstained body of the deceased was also dumped in the back of the van.