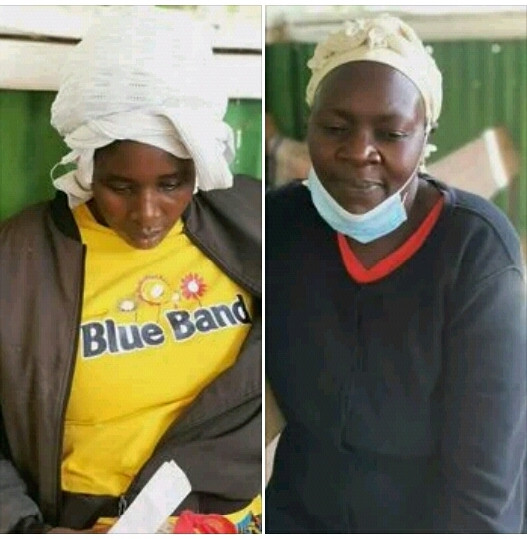 Two Kenyan women have been arrested for stealing a newborn baby boy from a 17- year-old mother and altering the birth notification details.

The two suspects, Judith Ingahitzu, 47 and her aunt, Florence Musimbi Abulu, 62, were on Monday morning, October 18, arraigned at Webuye Law Courts, where they initially pleaded guilty of two counts including Acts that Promote Child Trafficking (attracts a 30-year jail-term or 30 million fine), but later on in the afternoon changed through a lawyer.

According to a statement by the Directorate of Criminal Investigation, the duo were arrested on Friday 15th October, 2021 by DCI’s Anti-Human Trafficking and Child Protection Unit (AHT&CPU) detectives, acting on a tip-off reported anonymously through the DCI hotline.

“The anonymous call from a curious member of the public, reported of a miraculous baby boy born to a village woman who, unlike the biblical Mary mother of Jesus, was never seen carrying a pregnancy,” the statement read.

“Equally awed, detectives manning the DCI hotline centre alerted their ever ready AHT&CPU counterparts, who immediately swung into action by dispatching a team to Kakamega’s Matete area on a fact finding mission on October 14

DNA tests run at a different hospital in Kisumu equally contradicted the suspect’s allegations. Cornered like a terrified rat, Judith had opened up to detectives, revealing a second suspect, her aunt Florence.

Detectives furthered their investigations to Kikuya village in Vihiga, where the 67-year-old was also arrested.

Thorough interrogations on the duo established that Judith had called Florence earlier in the year, asking her to find ways of getting her a baby

Florence, who was privy to a case of an expectant 17-year-old girl living with her grandmother at Vihiga’s Kaimosi area, offered to help

She (Florence) had then approached the girl with a job offer as a househelp in Nairobi, which the helpless minor accepted at once

Connecting her to a family living in Kajiado’s Ongata Rongai area, Florence warned the young girl not to reveal to any of her relatives that she was expectant, before instructing the girl’s employer to release the girl back to her as soon as she was due for labor

As agreed, the orphan girl had been picked by Florence 10 days to her delivery date, who stayed with her for the period before taking her to Vihiga Health Centre on Sept 8 where Judith appeared, tendering her till she gave birth to a baby boy

“Threatened with dire consequences if she told anyone, the girl has had to live with the pain, until our detectives struck on Friday. Over the weekend, the girl was united with her baby boy, before the two were taken for medical care and rescued to safety,” the statement read in part.

It was gathered that bond ruling will be made on Monday, 25th October, 2021.

We’re looking forward to working with Biden and Harris – Nigerian...