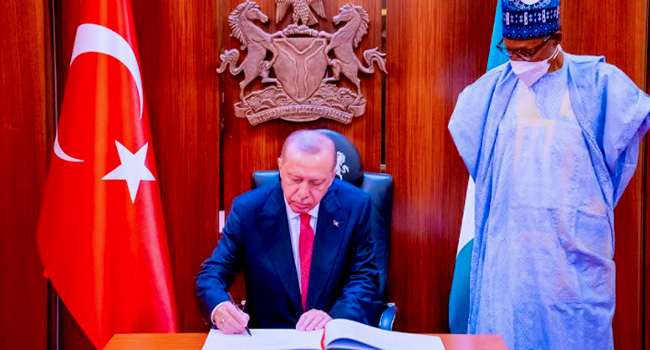 President Recep Tayyip Erdogan of Turkish has asserted that members of the Fetullah Terrorist Organisation (FETO) that attempted to push him out of power on July 15, 2016 through a failed coup are currently in Nigeria.

Erdogan stated this on Wednesday during a joint press conference with President Muhammadu Buhari in Abuja, the nation’s capital.

The Turkish leader is on a two-day working visit to Nigeria, just as he is also touring two other African countries – Togo and Angola.

“The perpetrator of the heinous failed coup of July the 15th, FETO, is still illegally active in Nigeria, and we are continuously sharing our intelligence with the Nigerian interlocutors and authorities.

“I hope and pray that our Nigerian brothers will forge a closer solidarity in this field with us, the Republic of Turkey.”

Meanwhile, he sought the collaboration of the Nigerian government to overcome extremism and terrorism that has become a global phenomenon.