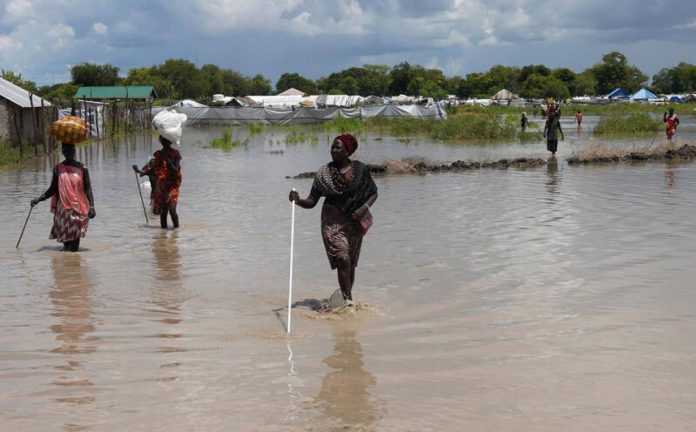 …Displaces families from their homes.

Almost 370,000 individuals have been forced to abandon their homes as a result of heavy rainfall which is happening for the second time in this year.

Scientists have attributed the unusual rains to cyclical weather pattern that has been worsened by climate change.

The UN reported that nearly 370,000 people had to flee their homes since July, and roughly half of South Sudan’s 78 countries have large swathes of land underwater.

In a report by Reuters, as at the time the waters started rising, ethnic violence had already forced South Sudanese mother, Vorgol Poulo, her husband, and their seven children to flee their home twice this year.

They were desperate to stay home when the rains began in July but ten days of heavy rainfall destroyed most of their possessions, forcing them out for a third time.

“The cows are sick. We have lost so many, we don’t know the number,” said Pulo, who sold charcoal before flooding put most of the market under water.

She stated that the family cannot afford plastic sheeting for shelter or firewood and like most people in the area, they now eat once a day.

Meanwhile, South Sudan can only boast of a fragile peace deal as it was still sway from five years of civil war which ended in 2018. Notwithstanding, attacks by bandits, ethnic militias and hold out groups are still common.

Suspension of Twitter in Nigeria is suppression of freedom of speech,...