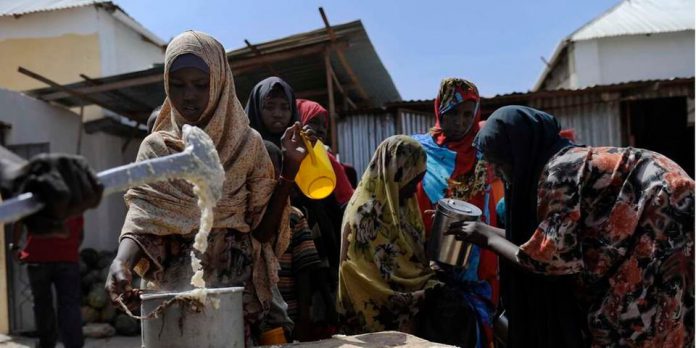 Somalia has raised alarm over food shortage that has hit the country, which is currently affecting at least six million people.

Officials from the Ministry of Humanitarian Affairs and Disaster Management posited on Saturday that a humanitarian crisis is looming in the country.

Following a joint meeting with line officials in the federal states, the ministry stated that it needs urgent aid delivered to more than a third of the country’s population that it said is at risk of starvation.

“Intermittent droughts and floods in different parts of the country, political mayhem and effects of the Covid-19 pandemic, coupled with plagues by locusts, have worsened the humanitarian situation,” the officials said in a joint statement.

Somalia, which is currently holding much-delayed elections, has also been under attack by militant group al-Shabaab for more than a decade.

Moreover, intermittent weather patterns have resulted into lengthy droughts and floods in the last seven years.

Officials disclosed that many of those facing hunger today are displaced people and warned that the group may also face the risk of infectious diseases.

“We acknowledge that Somalia has made significant progress but the adverse conditions can cause a tremendous setback,” the officials stated, adding that there is an urgent need for preventive interventions while envisioning long-term investments to foment permanent resilience.

Teenage arrested in Adamawa for the alleged murder of mother and...

The business of Interior Designs, Decor, as well as Coordination is...