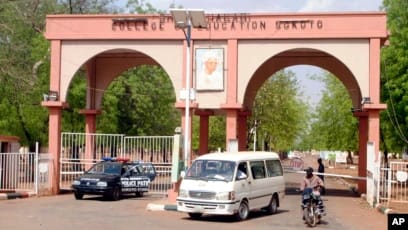 Authorities in Nigeria’s Sokoto state are enforced a 24-hour curfew, imposed Saturday to ease protests demanding the release of suspects in the killing of college student Deborah Yakubu.

Recall that Yakubu was beaten and burned by fellow students on Thursday for alleged blasphemous comments about the Muslim Prophet Muhammad in a WhatsApp group.

The curfew followed Saturday’s protests at which hundreds of residents demanded the release of two suspects arrested by the police the day before in connection with the murder of Yakubu.

The protesters attacked two Catholic churches, destroyed vehicles and damaged many shops in the metropolis before security officials dispersed them with tear gas.

Yakubu was a 200-level student of the Shehu Shagari College of Education. She was stoned to death and her body was burned near the school Thursday amid accusations of blasphemy by fellow students.

The killing has since been criticized by many religious and rights groups, including Amnesty International which described the incident as “sad and very disturbing.”

“When impunity continues in a country, you’ll definitely see a repeat of such crimes or acts and conducts,” said Seun Bakare. This is not the first time that we’ve read or heard that things like this continue to happen in the 21st century,” an Amnesty International spokesperson.

Meanwhile, Nigeria’s President Muhammadu Buhari has strongly condemned the murder of Yakubu and demanded an impartial probe into her death.

Yakubu was buried on Saturday in her hometown of Tunga Magajiya in Nigeria’s Central Niger state.

But security intelligence groups are warning of a possible spike in violence across many more northern states.

“One of the things causing religious crisis in Nigeria is the fact that people feel that blasphemy is a criminal offense, and they also feel like the law is slower to take its cause,” he said. “If we expunge that from our laws, people will begin to think and realize that Nigeria is a secular state and people have the freedom to express themselves.”