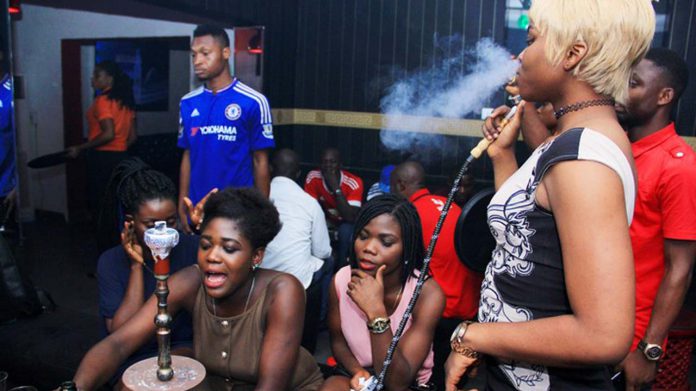 Some health experts have cautioned that smoking shisha is far more dangerous to health than smoking cigarettes.

The experts argued that contrary to the belief held by many people that shisha is less harmful than cigarettes, a puff of shisha contains more toxins than a cigarette.

Shisha is a form of tobacco smoking that has become fashionable in society, with many who do not smoke cigarettes embracing it. It is considered a better alternative to cigarettes. It is also called hookah, water pipe, or goza.

According to news-medical.net – an online medical media site – the practice of smoking shisha involves burning charcoal in order to heat a special preparation of tobacco (shisha) which often contains molasses, honey or flavourings.

The site explained that when the shisha is heated up, smoke is produced that bubbles down through a container of water and into a long hose-like tube, fitted with a mouthpiece.

However, public health experts have warned that smoking shisha puts people at risk of the same health complications as cigarette smokers, if not more.

A public health expert, Dr Timothy Obembe in an interview with a news platform (PUNCH HealthWise) said smoking Shisha is worse because the smoker is smoking unfiltered smoke, unlike cigarettes.

He said: “In cigarettes, you have the filter within the cigarette so what the smoker is actually inhaling is filtered smoke but shisha does not have any filter, so what you are inhaling is the direct smoke, which is more disastrous and harmful to the human body.”

In addition to this, the World Health Organisation (WHO) says that in a typical one-hour shisha smoking session, users may inhale 100 to 200 times the amount of smoke they would inhale from a single cigarette.

Also, WHO added that the smoke produced, even after it has been passed through water, contains high levels of toxic compounds which include carbon monoxide, heavy metals and cancer-causing chemicals.

Also, in a single waterpipe session, users are exposed to up to nine times the carbon monoxide and 1.7 times the nicotine of a single cigarette.

Obembe, who is a public health specialist at the College of Medicine, University of Ibadan, also pointed out that people who smoke shisha feel that it helps their social life.

“A lot of people who smoke it feel like they have psychological benefits attached to it.

“Some of them who use it claim that psychologically it makes them feel at home. They feel it helps them connect better with people socially.

“They claim these to be the mental benefits but when it comes to health itself, there are no benefits attached to it,” Obembe clarified.

Also speaking, a Professor of Public Health, Dr Tanimola Akande in agreement said there is no practical health benefit in smoking shisha.