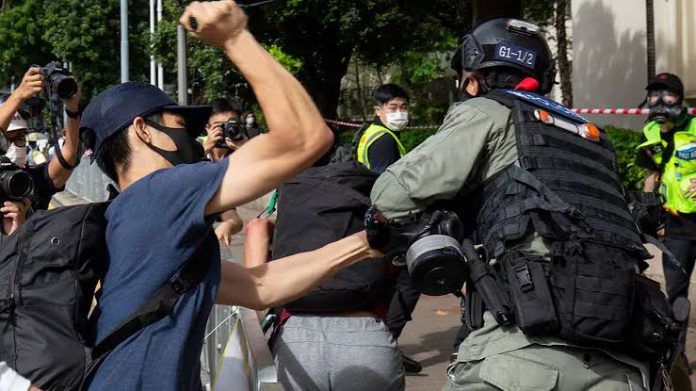 Security operatives have disclosed today that a man suspected of stabbing a Hong Kong police officer in the shoulder during a protest was arrested on board a flight, a statement read.

“During the early hours of July 2, a 24-year-old  man surnamed Wong was arrested at the airport on the suspicion of wounding,” police said in a statement.

A police source, requesting anonymity to speak openly, said the man was pulled from Cathay Pacific flight CX251 to London, moments before it was due to leave the departure gate.

“He bought a ticket last minute. He was the only passenger on the flight to have purchased a ticket so late and had no check-in baggage with him,” the source told AFP.

The flight was delayed for nearly an hour according to Hong Kong International Airport’s record.

Police said seven officers were injured and more than 370 people were arrested on Wednesday. The stabbed officer was attacked as he tried to make an arrest, police said.

Three others were injured when a man flying a Hong Kong independence flag rammed his motorbike into a group of officers in a scene that was captured on a mobile phone.

Wednesday marked the 23rd anniversary of the city’s handover to China. A day earlier, Beijing imposed a sweeping security law on the city, outlawing acts of subversion, secession, terrorism and colluding with foreign forces.

Beijing said the law would restore stability after nearly a year of unrest, but instead it sparked the worst street violence in months.

Critics and many Western governments say the law ends Hong Kong’s unique political freedoms and its judicial and legislative autonomy.

By Wednesday afternoon, the first arrests under the new law had been made — mainly for people possessing pro-independence flags and leaflets.

Under the new law, certain political views and symbols became illegal overnight — including showing support for the independence of Hong Kong, Taiwan, Xinjiang and Tibet.