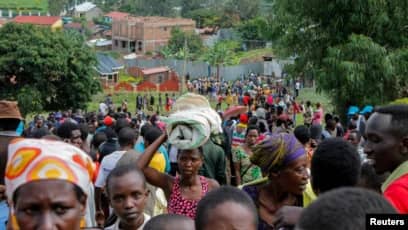 Rwandan President, Paul Kagame threatened to evict thousands of Congolese refugees living in Rwanda if the international community continues to blame his country for the conflict in the east of the Democratic Republic of Congo.

“We cannot keep being host to refugees for which we are later on held accountable in some way or even abused about — refugees as a result of ethnic cleansing based in another country — and we must be a dumping ground of those people who are being deprived of their rights.”

Kagame switched from the national Kinyarwanda language to English to deliver his message, as he often does when he wants to talk about the international community.

“We are really prepared to be blamed, but we will be blamed for doing what we must do,” Kagame said in an address punctuated by clapping and applause from members of the Rwandan Parliament.

Meanwhile, the Congolese government and a recent U.N. report blame Rwanda for supporting the M23 mostly Tutsi rebel movement fighting in the east of the country against the Congo government. Rwanda has consistently denied the accusations, saying it is Congo’s internal issue.

COVID 19: 3 Killed As Police Fire On Protesters In Kenya