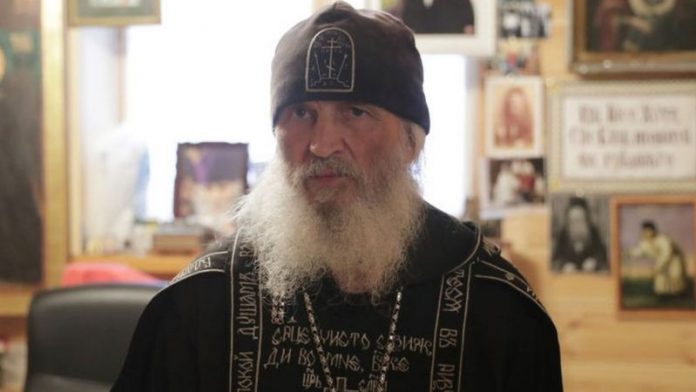 Russian police have arrested Father Sergiy, who is an ultraconservative defrocked priest who allegedly told followers to kill themselves, disobey social distancing and face mask orders.

The former priest who took over the convent in June after the Russian Orthodox Church banned him from preaching was said to have encouraged the faithful to disobey public orders.

Speaking to hundreds of his church members, it was gathered that he has denied the existence of the coronavirus pandemic and encouraged minors to kill themselves.

Russian authorities shut churches to worshippers between April and June, prompting Fr Sergiy to accuse them of co-operating with “forerunners of the Antichrist”.

Fr Sergiy was detained in a raid in the early hours of Tuesday, December 29, after clashes between police and his followers which lasted about an hour.

Later on, a video was posted by one of his supporters in which he said that he was ‘OK’.

“Forgive them, Lord, for they know not what they do, and even if they do, forgive them anyway,” Sergiy reportedly said as he was arrested.

It was gathered that he publicly urged not less than 10 nuns to commit suicide.

During a sermon he is seen asking his congregation, which includes children, whether they are ready to “go to the cross” for Russia, their children and their future.

The clergyman was a former policeman, and spent 13 years in a prison colony for murder. He was released in the late 1990s.

Prior to this occurrence, Father Sergiy has made numerous controversial claims in the past, including suggesting the Antichrist would soon rise in Russia as a counterpart to President Vladimir Putin. He has criticised laws he disagrees with, including those banning domestic violence and anti-Semitic sermons.

Gov’t to crackdown on gold smuggling to implement gold for oil...

Teenager allegedly stabs Friend to Death over Phone in Adamawa