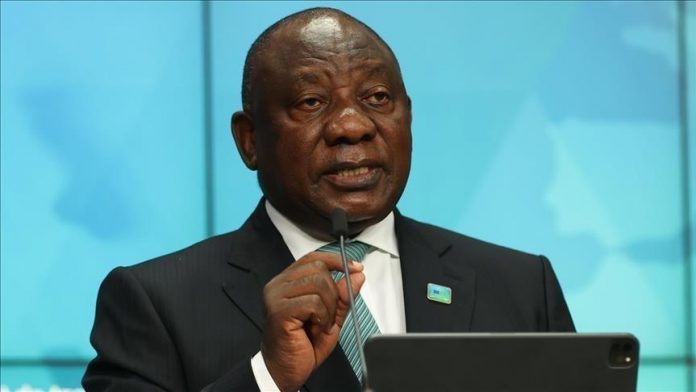 The President of South Africa, Cyril Ramaphosa suspended the country’s anti-corruption chief Advocate, Busisiwe Mkhwebane on Thursday over allegations that she was being politically biased in his investigations.

The presidency states:
“The Constitution provides that the President may suspend the Public Protector (or any member of a Chapter 9 institution) at any time after the start of proceedings by a committee of the National Assembly for (their) removal.”

Meanwhile, a court ruled four years ago that she had acted inappropriately while conducting some of her investigations.

Mkhwebane’s suspension comes barely one day after she announced she would investigate claims of money laundering against Ramaphosa.

“The timing of the suspension of the Public Protector by the President is not right. Why does he do that after she is going to investigate the Farm gate issue?” political commentator, Mustapha Mheta said.

Mheta said Ramaphosa is slowly losing his democratic credentials. “Does he have anything to hide,” he asked.

Meanwhile, the country’s former spy boss, Arthur Fraser, filed a criminal complaint against the president earlier this week, accusing him of money laundering and not reporting a robbery at his farm where $4 million was allegedly stolen.

The robbery has created outrage among South Africans who question why there was so much foreign currency at the president’s farm.

Ramaphosa explained that the money was the proceeds from the sale of the game at his farm and not from taxpayers.

“I have never stolen taxpayers’ money. I want to reaffirm that I was not involved in any criminal conduct and once again I pledge my full cooperation with any form of investigation,” said Ramaphosa.

He asserted that the $4 million figure being reported is exaggerated and claims being made against him are politically motivated but this will not deter him from focusing on rebuilding the economy and fighting corruption.

Uhuru drums up support for Raila in Kisumu, urges Kenyans to...

Second Fugitive on US Most Wanted List arrested in Meru