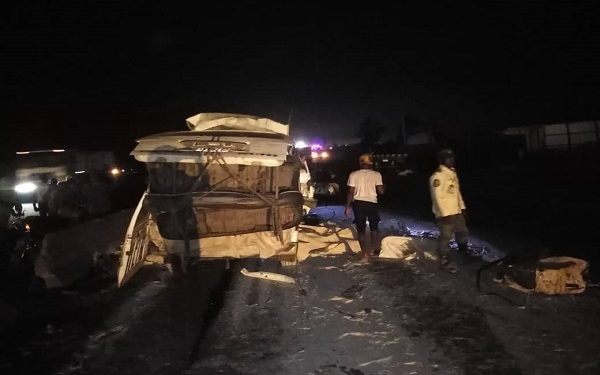 Three persons, including a pregnant woman, have been reported dead in another Lagos-Ibadan road accident.

It was gathered that the accident which occurred around 4:30am at Danco – Ibafo expressway on Thursday, involved four vehicles – DAF Truck marked XY 895 GGE, Iveco Truck with registration number JBD 16 XY loaded with granite, Mazda bus marked LND 676 XX conveying tomatoes and another Mazda Bus with registration number BDG 755 YA loaded with garri.

Eyewitnesses recounted that the Mazda bus driver carrying sacks of garri lost control and rammed into a truck from the rear, triggering multiple hits by other vehicles. They said there were nine passengers in the Mazda bus

The spokesperson of The Ogun State Traffic Compliance and Enforcement (TRACE) Corps, Babatunde Akinbiyi, who confirmed the accident stated: “the driver of the Mazda bus loaded with garri lost control as a result of speeding and rammed into a run away truck from the rear, leading to multiple hits by other vehicles.”

Akinbiyi added: “The dead victims were evacuated by the FRSC officials to Idera Private Morgue, Sagamu, while TRACE officials cleared the road to regulate and normalize traffic.”

“I see Hushpuppi becoming a pastor after his jail term” –...