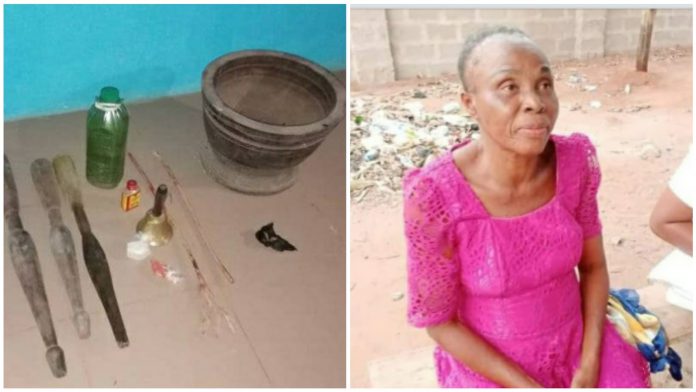 A popular prophetess in Onitsha, Anambra State, has been arrested for allegedly pounding little kids alive.

During the raid in on Thursday evening, three children were found naked with their hands and legs tied.

The prophetess and her accomplice have been identified as Chidi Felicia Nwafor (80 years) and Rejoice Raymond (39 years). They were arrested by the police attached to 3-3 Police station Nkwelle, Onitsha, Kossy Derrick reported.

The entire room had blood stains alongside fetish items, including a mortar and multiples pestles, blood-stained canes, concoction and more. The woman’s house is located at 13, Akunwanta Mbamalu street, Federal Housing estate 3-3, Nkwelle.

In the room, a bucket where the children were made to poop was found as they were not allowed out of the room because they were locked up.

Kenyan Woman steals lover’s phones following his refusal to give her...