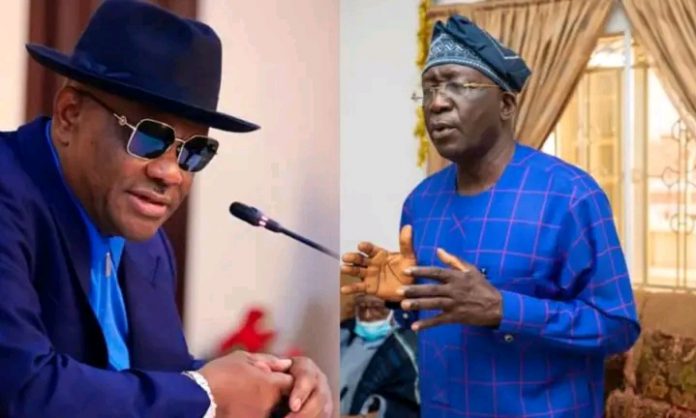 Rivers State Governor Nyesom Wike has threatened a showdown over the suspension of some of his political allies in the Peoples Democratic Party (PDP) for alleged anti-party activities.

He vowed to challenge, in particular, the dissolution of the Ekiti State Executive Council of the party believed to be loyal to a former governor of the state, Mr. Ayodele Fayose.

Fayose is an ally of the Rivers State governor.

Wike told the National Working Committee of the Peoples Democratic Party (PDP) that its decision to suspend his supporters was off course.

Former governor of Enugu State, Senator Chimaroke Nnamani who was similarly axed in the suspension gale, also protested the action against him.

He said he was neither told his offence nor given an opportunity to defend himself before a disciplinary action was taken against him.

Wike and his colleagues in the G-5 (Governors Seyi Makinde of Oyo, Samuel Ortom of Benue, Ifeanyi Ugwuanyi of Enugu and Okezie Ikpeazu of Abia) are opposed to PDP’s ceding of its presidential ticket and national chairmanship of the party to the North.

They consequently opted out of the campaign of the PDP presidential candidate, Alhaji Atiku Abubakar, and called for the resignation of the chairman, Dr. Iyorchia Ayu.

Wike, speaking yesterday during the inauguration of the State PDP Campaign Council in Bori, Khana Local Government Area of the state, said the suspension of party members loyal to the G-5 governors would not help the PDP in the February/March elections.

He branded the dissolution of the Ekiti State executive committee of the PDP as an act of tyranny that would be challenged in court.

He branded the dissolution of the Ekiti State executive committee of the PDP as an act of tyranny that would be challenged in court.
He dared Ayu to suspend him or any of his colleagues in the G-5.

“The battle line has been fully drawn. As I speak to you, we will do everything legally possible to challenge any decision we know is illegal.

Continuing, Wike said: “We are waiting for you to announce my own and any other of my friends. Like I have said, when a man says you will not sleep, he too, will he sleep? Will Ayu sleep? Will those his cohorts sleep?

“You are doing what will give you more headaches as far as this election is concerned. We are watching and we are waiting for you to announce more of my friends.

“When a man says you will not sleep, will he sleep too? Will Ayu sleep?”

Matiangi and Kibicho’s security scaled down months after leaving office