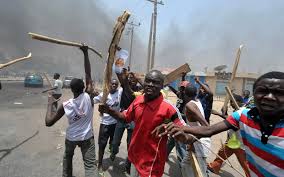 Some armed men suspected to be members of a cult group have engaged security operatives in a gun battle that lasted for about one hour.

It was gathered that the incident happened late on Saturday at Aguleri community in Anambra East Local Government Area of Anambra State.

Aguleri is the hometown of the immediate past governor of the state, Chief Willie Obiano.

The armed men were said to have invaded the community and started shooting before police operatives stormed the area and both parties continued to engage themselves in the gun battle.

The reason for the invasion could not be ascertained, but sources in the area said the youths were heading towards a police station in the community before they were repelled by the police operatives.

Although, no person was killed, but sources said some policemen and members of the armed gang were injured during the shootings.

We will support any peaceful and sustained efforts to promote good...