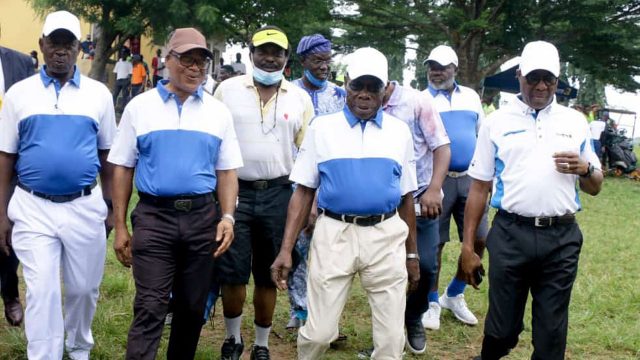 Defending champion, Olajide Owolabi Michael has successfully retained his title as he emerged the winner of the 5th edition OBJ Golf tournament held over the weekend in Abeokuta.

He carded a score of 69-net to beat Tolu Olugbemi who shot 70-net score while Harrison Karuiku with a score of 71 came in third position.

Speaking at the closing ceremony, former President, General Olusegun Obasanjo (rtd) charged the winner to see his victory as an opportunity to work harder.

He also ccommended FirstBank of Nigeria Limited for keeping faith with the annual OBJ Golf Tournament.

The former President also said he hopes the tournament will remain a regular and consistent tournament on the nation’s golf calendar.

“I want to show my appreciation to FirstBank of Nigeria Limited and Abeokuta Golf Club for keeping faith and maintaining this event, and I hope it remains a regular tournament on the nation’s golf calendar.

“Since FirstBank has maintained the Lagos Open Golf Championship for sixty years, the Kaduna Polo (Georgian Cup) which enters 102nd edition this year, the Dala Harcourt (Tennis) which has also ran for 30-years, OBJ Golf tournament should also be maintained,” he said.

Other winners were Sade Opawunmi who won in the ladies’ category, while Club Captain, Kola Adeneye won the Veteran category.

Tunde Owolabi, who represented the Group Managing Director of FirstBank, Adesola Adedutan at the event pledged FirstBank’s commitment to sponsorship of the annual tournament.

Fornication is no respecter of gender, Toke Makinwa Asserts

Nigeria: Inflation rises to 17.7% in May